The Man Behind the Gilbert Electric Eye!

So I'm about to plow into Pep Comics # 3 (because when you write a blog like this, Pep Comics is a golden goose if ever there was one), and I just have to take a look at the ads.  This time, you can force guilty relatives and neighbors who don't want trouble to buy magazines.  And look at one of the prizes you can earn!

I SAID LOOK AT IT!

So naturally, I had to see exactly what a Gilbert Electric Eye was, because if the picture is anything to go by, it's what Reed Richards uses to travel to the Negative Zone.

Turns out "Gilbert" was Alfred Carlton Gilbert.  Alf's friends and I'm sure thousands of satisfied lovers called him "A.C." because anyone that bitchin' didn't have time for long handles like "Alfred Carlton."

And before you think I'm just being snarky, you should know that A.C. was a pretty cool cat.  He saved Christmas in 1918 by convincing Congress not to ban the production of toys during WWI.  It also turns out that at one point, the man held the world record for most consecutive chin-ups.  He invented the pole-vaulting box (that place where the jumpers plant their pole) and, just to show everyone what's what, actually won a gold medal in the sport in 1908.

And somewhere along the line he invented a little thing called the Erector Set.  By the time of his death, he had patented over 150 toys.

Meanwhile, I have a blog where I make clever little comments about things I find in comic books.  I guess everyone just has to find their niche.

So what was the Gilbert Electric Eye?  Near as I can tell, you hooked it up to whatever you wanted to operate via a photoelectric eye.  So, if you wanted to hook it up to your alarm clock so it would go off when sunlight struck it, there you go.

Before I call it a day, check out the wording of this coupon: 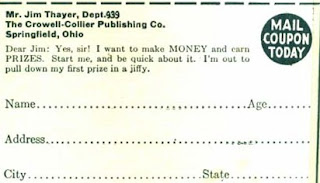 "... and be QUICK about it!"  Jim Thayer apparently appreciated verbal abuse.  I'm not trying to judge, but he was clearly no A.C. Gilbert.