The Moistened Body of the Shield

As you were warned yesterday, today we plow into Pep Comics #2.  Let's take another look at the Golden Age Shield, who wastes no time showing off his most amazing power yet: 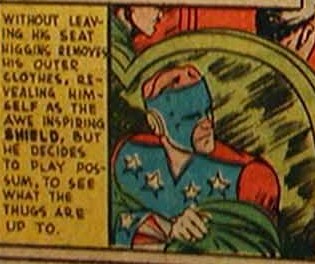 Yes, the man can get out of an entire suit of clothing while being seated in a commercial aircraft.  I can't even unbend my knees.  That was dang impressive.

You know what else was impressive?  This: 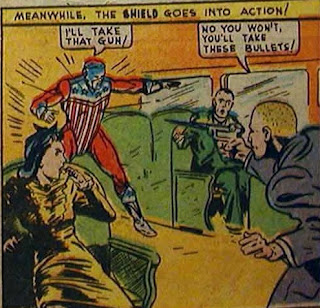 Yeah!  You know he's gonna make you eat that gun, but you might as well get in his head with a little trash talk.  Kudos, Random Henchman!

Hey!  It's time for Fun with Out of Context Dialogue! (tm!):

I usually have cereal and toast.  It's hard to get it down when it's really cold outside, but fiber needs being what they are...

... oh, were we not talking about breakfast?  Moving on: 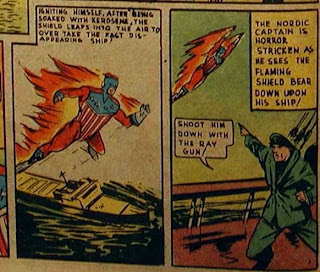 I'm not sure what he intended to accomplish by setting himself on fire first, but what more caught my eye was the ray gun that just came from out of nowhere: 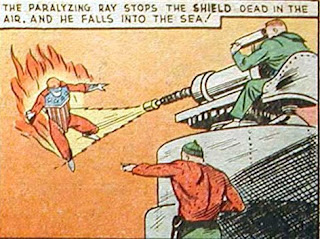 A paralyzing ray?  What?  I promise you, there was no foreshadowing in this story that anyone had a paralyzing ray!  The Shield was just investigating piracy against oil tankers off the coast of Puerto Rico.  Who the heck said anything about a paralyzing ray?

I'll tell you one thing about a paralyzing ray: 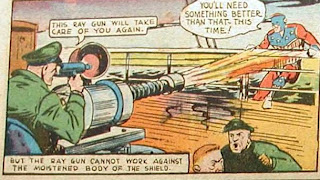 It is useless against my moistened body. 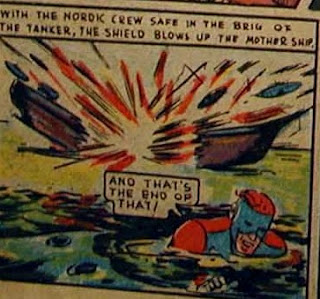 I'm not sure how he pulled that off, because he didn't have any explosives on him, nor did we ever see any on the ship.  If he blew up the fuel supply, that was really short-sighted of him.  Couldn't the USA have used a few thousand gallons of oil?  Not to armchair quarterback the guy, but...

Email ThisBlogThis!Share to TwitterShare to FacebookShare to Pinterest
Labels: golden age, the shield, weapons that have no explanation whatsoever

There was noone sitting next to him? Noone across the aisle? Noone anywhere that might have seen him changing out of his secret I.D. Don't they get peoples names when they board aircraft? Wouldn't someone on the crew be curious as to who The Shield was? It wouldn't be that hard to narrow it down. No kids, no woman, no elderly, you are left with afew middle aged men. Even then any of them don't have brown hair? The guy is really playing fast and loose with the old S.I.D.
Also apparently the ray gun doesn't only paralyze a person, but it immediately robs them of all forward momentum.

Wait! I figured it out. Bad guys ALWAYS put a self destruct or some sort of easily discoverable fault on their superweapons. He just knocked everybody out, set it for a minute or so and jumped. Occam would be proud.

But, here we have another example of a super"hero" commiting mass murder. I REALLY don't like it when "heros" commit ANY murders. It isn't very heroic if you ask me.