No posting on Monday, my lovelies... it being a holiday and all.

But that's okay, because it's time for The Midshipman story from Pep Comics #2!

Now you may recall that Lee Samson (who, with a name like that, had to either be a military man or a carny) had the dubious honor of winning the conditional affections of .... eh, I don't remember her name and I don't care enough to scroll down to find it.  And apparently her affections are as fleeting as ever:

It was explained earlier in the story about how if Lee ran his part of the race one way, his team would win, but I don't think it was a relay race so I'm not really sure how that would have worked.  Anyway, Lee should have stuck with the "good riddance" sentiment, but you know he'll be apologizing to Princess as soon as the race is over. 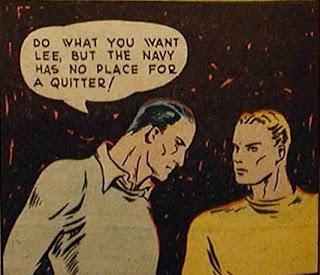 Again, I'm not sure where that's coming from.  He's saying he wants to beat someone individually, even if that means his team loses.  That may be disloyal, or not a team player, but I don't think he's a quitter.  No wonder Lee looks confused there.

I have a really hard time following these stories.

Anyway, he ends up running the race, which is as exciting as reading about a race in a comic book is, which is to say not at all. Here he's running chest-deep through a river or something: 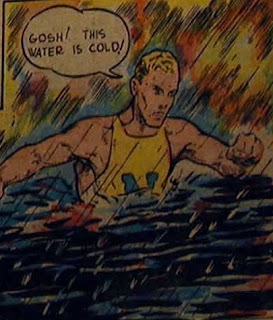 Okay, even if we have no clue it's going to rain (because we all know the military doesn't have all kinds of meteorological tech stuff for predicting the weather), don't you think they would have marked off an alternate route before the race began?  I mean, the military trains pretty hard to be able to adapt to situations.  The fact that they weren't able to come up with a way to detour a race in the amount of time it took for a chest-deep river to form isn't one of our proudest moments. 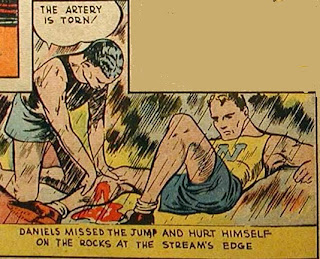 That's right, Daniels.  You race Lee Samson and you're going down.  One way or another.

I have no proof Lee was responsible, but you just know he was. 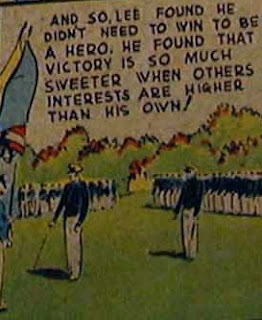 Oh, man... we learned a lesson.  I hate learning lessons. 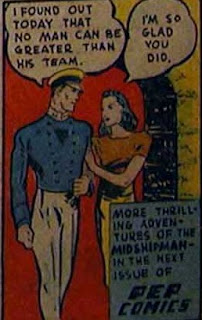 Email ThisBlogThis!Share to TwitterShare to FacebookShare to Pinterest
Labels: the Midshipman, we learned a valuable lesson today whether we wanted to or not, whippedville

Also...you aren't the only one who was confused. I couldn't make head nor tail of that story. Not really.