The Press Guardian story from Pep #3 has me befuzzled.  First, it appears that even though they totally revamped the character from the first story, they're going to bring it up. 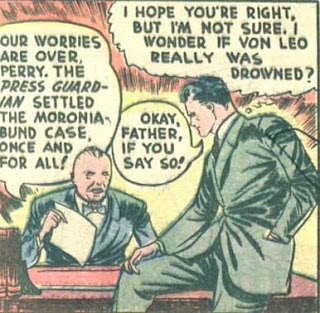 So, was Perry "The Falcon"?  Why did he lose that identity?  Someone needs to make with some explanations, or I may lose my deep reverence for this particular character.

But Leo is a pretty cool cat, so I don't mind seeing him come back: 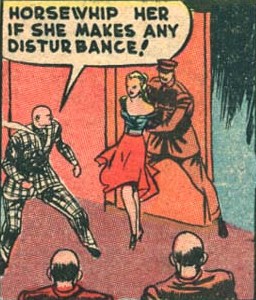 Yeah!  And shove bamboo strips under her fingernails if she doesn't make my sandwich correctly!

Now, I'm not trying to tell Leo how to run his evil railroad there, but wouldn't it have made more sense to just bomb the Daily Express?  I mean, it just seems a bit more direct is all...

Leo has a hard time with the smaller picture as well.  Thusly: 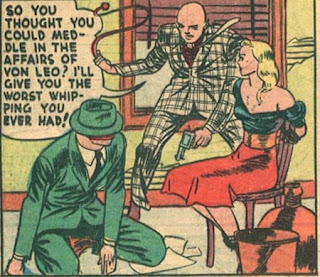 ...or, if I remember that I have a gun in my other hand, I'll just play it safe and shoot you!

Not that our hero is much better: 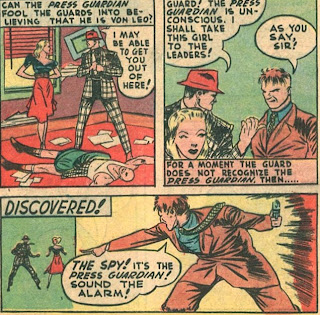 Okay, this does make more sense than Batman tucking his cowl into disguises (which is much more effective than I would anticipate), but how did the guard recognize the Press Guardian without his mask?  It's not that Perry uses the greatest disguise, but all things considered, that's one sharp henchmen.  When the Moronia Bund folks are looking to advance someone into management, they should review this guy.

And seriously, why is Perry even bothering? 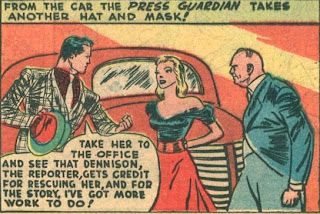 I'm not sure who the bald guy is.  Is that his dad?  Because his dad doesn't know that Perry is the Press Guardian.  Although he certainly does now.

You know what you can't do?  This: 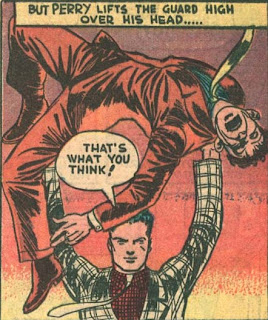 Try to lift someone high over your head that isn't cooperating.  It's not going to happen.  And if Perry has powers, I've yet to see that explained or revealed so I'm calling shenanigans.

Email ThisBlogThis!Share to TwitterShare to FacebookShare to Pinterest
Labels: golden age, press guardian, shenanigans, victory is in the details

Well, I am athinkin that the building across the street was empty for along period of time and thus easy to sneak into and plant LOADS of explosives.