Contributor Robert Gillis came up with a great idea to highlight dated pop culture references in comics.  I learned back in my college days that putting such things in your work immediately dates it.  That's not the worst of things, as it can be reflective of the time in which the work was written.  For example, Mark Twain's literature is generally pretty firmly tied into the era from whence it takes place, and it's awesome because we can see how people lived and thought at a certain period of time.

And we've seen that right here at CMNS as well.  But it's not always someone who is as immediately recognizable as JFK's forehead.  No, sometimes it's someone who might have been quite popular in the day (I mean, they were mentioned in a comic so they must have had something going for them), but nowadays it just makes us say.... 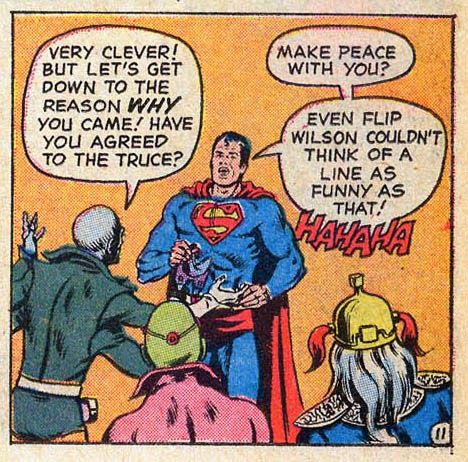 I actually know quite well who Flip Wilson is.  He had a variety show on when I was a wee lad and introduced me to the hilarity of cross-dressing:

The "Geraldine" bit killed me as a five year-old.  His show actually won a Golden Globe and two Emmy Awards.  George Carlin was one of the writers, so you can imagine how cutting edge it was at the time.  But for those of you who are unable to remember first-hand how awesome the 70's were, you might find yourself saying... 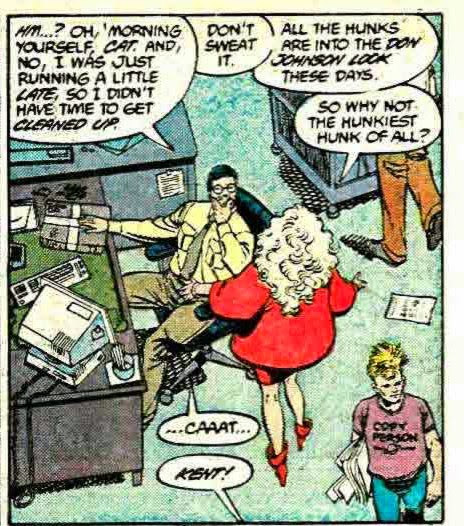 The Don Johnson look was a white suit worn over a T-shirt with no socks.  It was the 80's, man!

Here's when Don Johnson tried to be a singer:

And yeah, that's Dweezil "son of Frank" Zappa on guitar giving Don that "We're EVEN now!" look.  I don't know what favor Don did for Dweezil, but it must have been something that spared life or limb.  Sure, most of us still know him from Nash Bridges or Miami Vice, but you can believe this:  It's only a matter of time before someone reads that comic and says 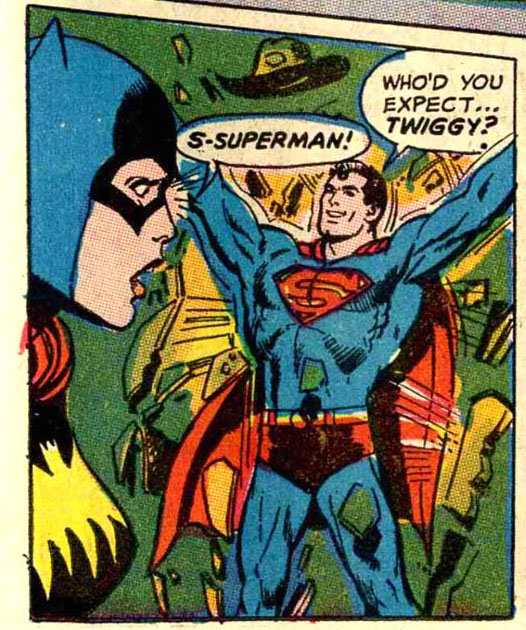 Twiggy was a rail-thin model.  As if there were any other kind.  She's done some appearances on America's Next Top Model, but I had to use The Google to learn that.  So, for most comic readers these days, I suspect many who read it would say...

We'll see who else pops up as we go!  Meanwhile, when you see a cool cameo or reference in a modern comic, just know ye this, whippersnapper: It's a very short distance from cool reference to

What does "TM!" mean? That it's copyrighted? I don't understand

TM or ™ (I hope that insertion works) means "trademarked".
Comics are notorious for trademarking anything that could pe potentially be merchandised.
I vaguely remember one comic cover with the title character discovering her male parent buried in rubble, probably badly-injured (if not dead)! So she screams "DAD!™"
I kid you not!

Yeah, I put "TM!" after every meme that we have here at CMNS. It's mostly for the humor, because it gives an air of importance to our silliness.

But there are also people who swipe my finds and post them on their own blogs or make "demotivational" posters out of them on that site, so it's my own way of saying, "Find your own material!"

But I originally put it on there when the term "super heroes" was trademarked. I figured at that point, let's just trademark everything we can!

I remember a time (late 70s? 80s?) when the comics companies became obsessed with TM-ing names, especially on covers. My faded memory can't recall which comic it was, but I remember one of the team books where every member of the team was listed along with his or her TM:

I remember that, Smurfswacker! They did it on the cover. It seems like Marvel had an icon of every character that would appear in the upper left corner and that would have a TM or an "R" next to it.