Batman as an Alien. You're Welcome.

You'd think that a story about Batman being haunted by Joker's ghost would be the highlight of Batman #140. 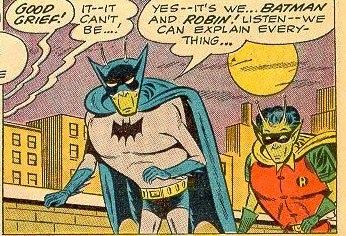 There's a story behind it, but who cares?  I think it had something to do with compensating for fighting the most poorly-named gang ever: 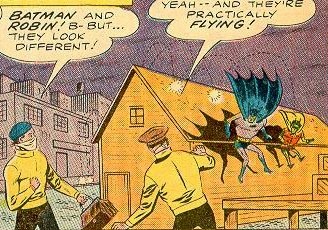 Guess what these guys are called?

I kid you not.  I presume that during the holidays, they become the Hideous Christmas Sweater Gang.

But don't focus on that.  Focus on this!: 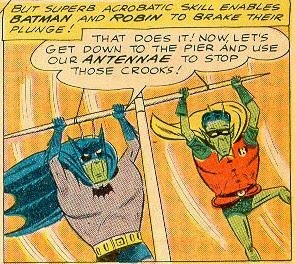 Robin's little green legs are extra hilarious.  Apropos of nothing, I tried frogs legs for the first time a couple of years ago.  They tasted like a stagnant lake.  Not my bag.  I don't know why Robin's legs reminded me of that. 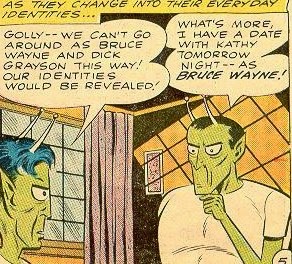 You know, I think they should stay aliens.  It would give the series a whole My Favorite Martian slant.  I smell the next major DC summer crossover: Your favorite DC characters are now aliens!  It can't be any worse than Millenium.

Check this out from the back cover: 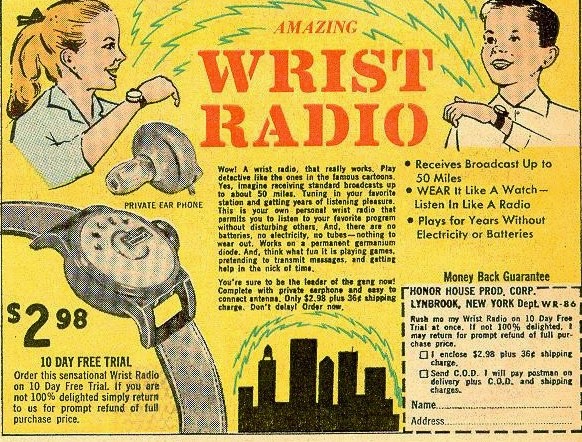 I was skeptical that this thing would pick up radio signals from 50 miles away.  My car stereo today doesn't do that.  Then again, I looked up what a Germanium diode is to see if it would really work for years without electricity or batteries and... well, son of gun.  So, maybe the thing did work like they said.  I've got to get my hands on one of those things.  Why aren't we using Germanium diodes all the time?

We learned something today, folks.  You may now enjoy your weekend.

I had one of these things, but in a tiny plastic box rather than on a wristband. It was one of the few times comic book ads told the truth. The thing picked up AM radio stations (remember AM radio stations?) without benefit of batteries. And at night when only powerful clear-air stations were broadcasting, you could even pick up stations from a hundred miles away.

Strangest of all, my brother and I discovered that by speaking into the earphone we could actually transmit to each other over some five to ten feet. Definitely cool.

I had one in a box, too, not quite a transistor radio. I'm in Chicago and it would pick up a radio station from Fort Worth. Not every night, I would always try around 10-11 PM, but about once a week I was able to get the signal clear, it was a news station and I sure had fun trying to work through the static every night before bed.

Adam: back on my grandmother's farm in Kentucky, it was frog legs and chocolate covered grasshoppers.

Fort Worth to Chicago is DANG impressive! I guess the Internet has made such things obsolete, but they certainly sound amazing.

Chocolate covered grasshoppers sounds more doable to me than the frog legs were. I'd do the fried cricket thing, too. Well, I say that. I bought a can of boiled peanuts 6 months ago because I was curious and still haven't mustered up the courage to eat them.