My lovelies, I'm afraid there won't be a post tomorrow, but I'll see you again on Friday, okay?

Meanwhile, am I the only one who found it disturbing that CBS chose to air a Victoria's Secret special the same night as Rudolph the Red-Nosed Reindeer?

I was taking a look at Batman #139, which most people will tell you was noteworthy primarily for the first appearance of the Silver Age Batgirl.  But there was oh-so-much more than that.  Thusly: 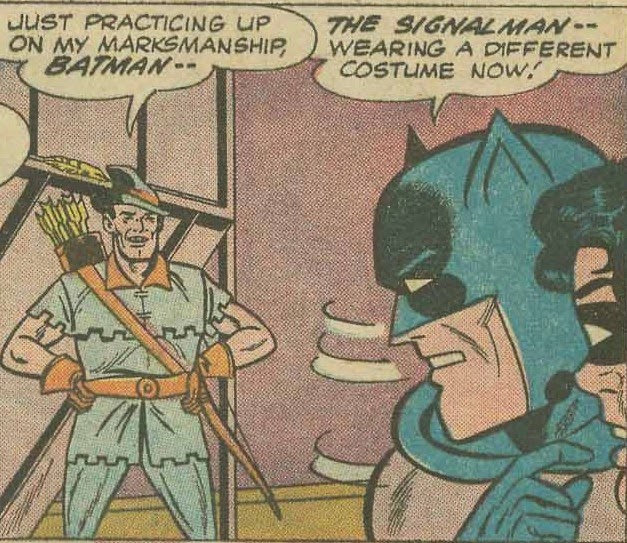 Yup!  It's the first appearance of the Blue Bowman!

What made him interesting is that someone bothered to take a previous villain (Phil Cobb, the Signalman, had appeared twice in the previous year or so) and stick him in a new identity with different gimmicks.  You hadn't seen too much of that sort of thing up to that point.

Anyway, check him out: 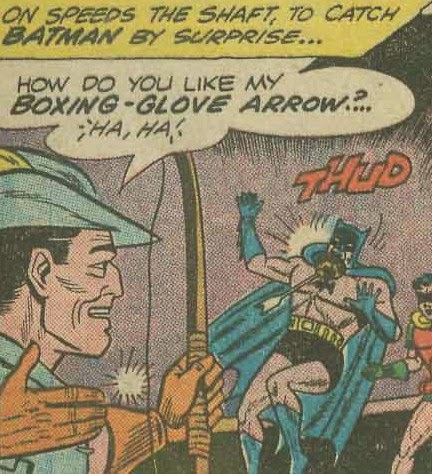 Did you catch that episode of Arrow where Oliver used an improvised boxing glove arrow?  I had to explain to Beloved why that was so incredibly awesome (once I finished squealing like a four year-old child).

And I know what you're thinking: Green Arrow should be suing this guy.  And you'd be right.  Thusly:

It's kind of wild that they came up with a Green Arrow clone to fight Bats, but it wasn't meant to be: That was the one and only appearance of the Blue Bowman.  Phil Cobb wouldn't appear again for 15 years (I guess you do more hard time in comics when you rip off a hero's gimmick) and it would be once again as the Signalman.

Meanwhile, here are Batman and Robin fighting a mechanical shark:

Hmmmmm... yeah, they lost that one.  All they could do was swim for shore and stay away from it.  Note to Self: Batman cannot defeat a mechanical shark.

Here are Batman and Robin fighting a big octopus: 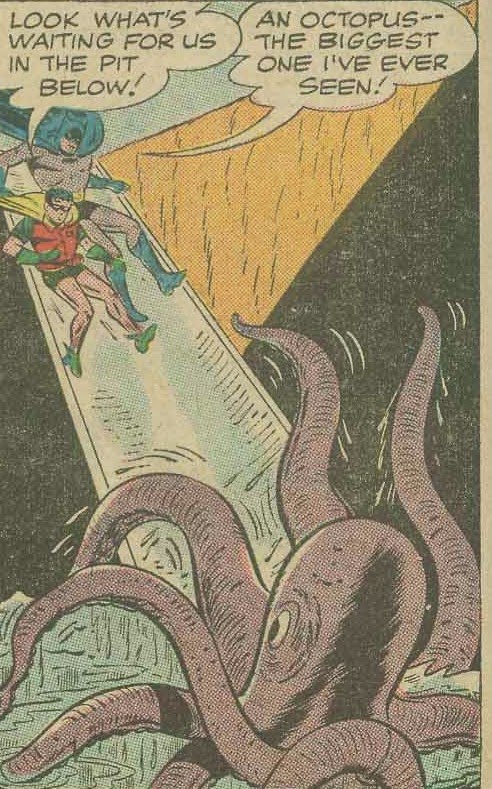 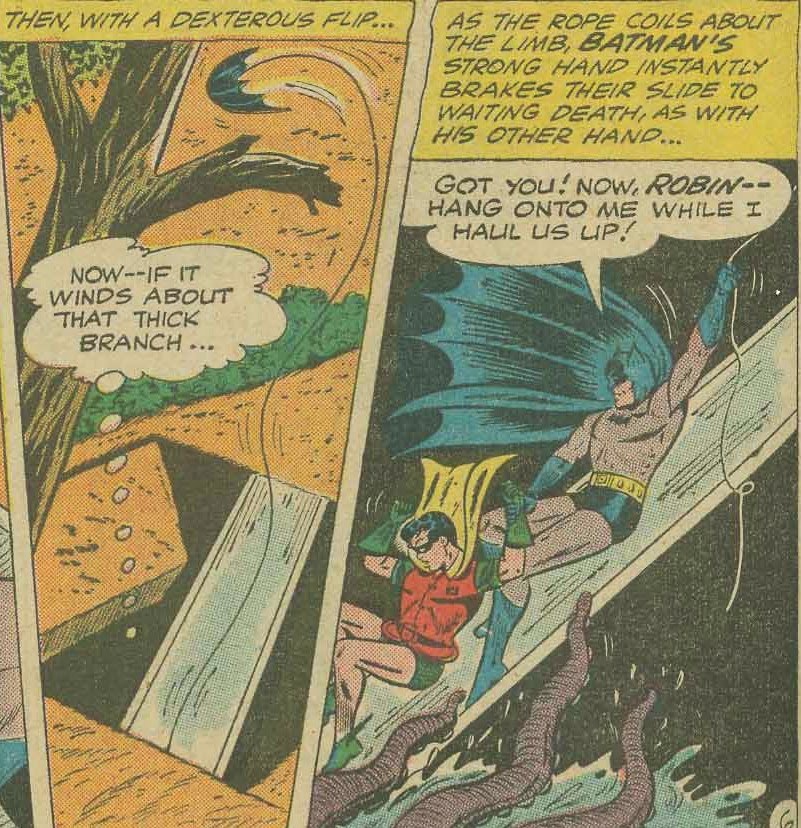 Hmmmmm...  There are a lot of non-events in that story.  I get that way sometimes when I'm playing a video game: If it goes on too long, I just run past everyone as much as possible to get to the end.  The artist probably got the script and said, "Maybe I could just show them avoiding these things.  That would be a lot easier to draw!"  But I didn't pay 12 cents to watch heroes avoiding danger, folks.  Someone owes me a scene of Batman fighting an octopus.

If he had used an actual arrow instead of that silly boxing glove thing, Batman would be dead!

The more of these Batman stories you post, the more I notice that rigid Silver-Age-Batman (and Superman, for that matter) dialogue style: always describing in detail exactly what is shown in a panel. "A monstrous metal turtle, breathing smoke from its nostrils, breaking out of that giant suitcase!"

I understand the usefulness of covering action in the dialogue if the drawing is unclear (or if a lazy artist left something out), but I don't see why editors had their writers describe the obvious as well. Did they believe their readers were too dim to comprehend the pictures? Perhaps they thought readers ignored the drawings and only read the balloons. Personally, with me it was the other way around.

Yeah, my thing was that I never read caption boxes. I noticed that in today's comics, words can be pretty sparse at times. And, to be fair, there are moments where I can't tell what's going on and wished someone would explain it to me. :-)

The Blue Bowman was qctually used as the name of the evil alternate-universe Green Arrow in an episode of Batman: Brave and the Bold. (And given the sheer number of obscure references that show had, I can't help but think it was deliberate)