That Cooky is Too Smart Thursday!

Being a jaded comic book nerdlinger, you'd probably see this cover and think, "Yeah, right. Another bait-and-switch plot where things aren't as they seem." 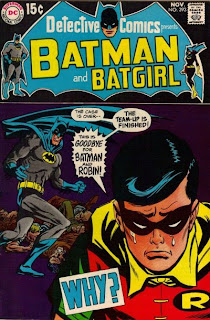 And for the first time in your life, you'd be wrong.
Detective Comics #393 was indeed the last issue where Batman and Robin worked together as a regular team.  As you can probably tell, changes were being made to the Batman character, and it finally occurred to someone that the darker, more realistic stories were hard to write when Bruce was running around with a  high-school kid in a green elf shoes and a cape the color of Big Bird.
But do we go out with dignity?  Would I be mentioning it if we had? 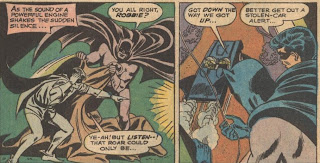 Leaving the keys in the Batmobile?  What could possibly go wrong? 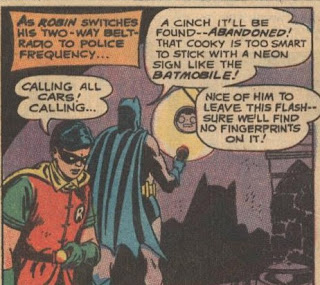 Hey!  The bad guy left his flashlight behind!  Cool!  Maybe we ought to start carrying one ourselves!
You get the idea.  Not that the two didn't have their silly moments in days gone by, but they probably could have looked a bit more polished at the end of the era.  Geez, it had been a thirty-year run!
See you tomorrow!
Posted by Adam Barnett at 12:51 AM

And he calls Robin Robbie. Its like a Jim Shooter LSH story circa 1968.

Jim Shooter is a friggin genius!