Hey!  A reminder to check out Snatcher Bodies, the online comic I'm doing with Gabe Ostley.  Remember, it's updated every Wednesday.
Amazing Spider-Man #112-115 was a multi-part epic that involved Spidey, Hammerhead, and the Courtship of Doc Ock to Peter Parker's Aunt May.  This holds a special place in my heart because Amazing #115 was the first Spidey comic I ever read.  Up until then, my only exposure to the character was his picture on the side of the boxes that held my Mego Action Figures, and I thought he was gross because of those webs dangling under his arms.  Shortly after reading this comic, I got to liking the guy, and the Spidey Super Stories segments on The Electric Company television show cemented my fondness for the character, although I've only checked in on him periodically over the years.
But enough nostalgia!  Time for Sound Effects Theatre! (tm!): 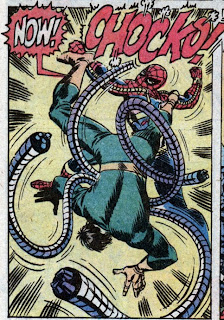 Chocko!
Of course, no issue of Amazing back in the Silver Age would be complete without a Disembodied Floating Head of Guilt! (tm!): 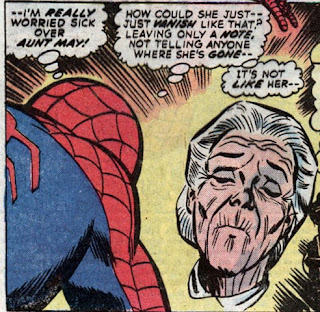 I realize this is only Pete's imagination, but if Aunt May was really looking like that, she needed to see a doctor.  Frankly, she already looks a little late for penicillin, if you catch my drift.
Oddly enough, the first Spidey comic I read had the character "Out of Uniform" of sorts.  Doc Ock had torn off Pete's mask earlier, and Pete didn't have time to make a new one, so he pilfered one out of a costume shop.  He complained that it was difficult for him to breathe in the replacement mask, but it also failed to cover his eyes.  Thusly:

I may have mentioned this before, but I greatly prefer the exposed eyes.  Look at the emotion you can convey that way.  I realize that it's much easier to draw blank ovals (and after drawing all those webs, I can understand an artist's desire for any short cut s/he could get), but it's a better look.  He kept it for an ish or two after, but would resort back to the two-way mirrored lenses again, and hasn't gone back since.  It's a shame.  If I'm ever editor-in-chief at Marvel, that's the first thing that's going to happen.
Well, the first thing that's going to happen is I'm suspending every X-Men book and spin-off until they make sense again.  But the second thing I'm doing is to reinstate the eye holes.
See you tomorrow!
Posted by Adam Barnett at 12:51 AM

"...but I greatly prefer the exposed eyes. Look at the emotion you can convey that way. I realize that it's much easier to draw blank ovals (and after drawing all those webs, I can understand an artist's desire for any short cut s/he could get), but it's a better look."

It drove me nuts that for decades, even in closeup, Batman had only blank ovals!
(And, it was clearly stated that he didn't have lenses in the cowl!)
With every other masked character, DC allowed the eyes to show, but NOT Batman!
It got to be really silly when Batman and, say, Green Lantern were in close-up in the same panel and Hal's eyes were clearly-shown, but not Bruce's!
It changed in the 1980s, and now, when he's not wearing lenses, you'll see Bruce or Dick's eyes in the cowl.

I REALLY don't like the exposed eyes on Spidey look! It just doesn't look right.

And since we are talking about what we would do if we ever became Editor-in-Chief at Marvel. The first thing I would do in such a position is cancel all of the Ultimate titles, second I would rehire Jim Shooter. Maybe this WWYD if you were EIC of Marvel would be a good question to pose.