Somehow, it got past me that an interview I did with Jon at Random Acts of Geekery was posted last week or so.  Check out a bit more of the man, the myth, the general nuisance right 'chere.

Let's check in on Batman over in Detective Comics.  Here in 'Tec #390, Batman encounters a throwaway villain called the Masquerader, who was directing his goons to tear at Batman's uniform during every encounter.  Surprisingly, this wasn't to bring in more female readers, but was instead to....

Yes, to find out the name of Batman's tailor.
Now, the "tailor to heroes and villains" angle has been used many times, but you have to wonder why Batman would be so stupid as to allow this information to be sewn right into his clothes.  Bats is usually much more thorough than this.
But they tried to second-guess me: 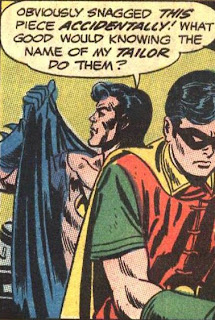 There.  See?  Bruce knew it was a possibility that someone would find out who his tailor was.  He just didn't think it was important information.
Okay first: SHENANIGANS!  Does anyone think for a second that the got-dang Batman is going to leave any such clue to where he gets his equipment?  Not even the Happy-Go-Lucky Batman of the 1950's would be that stupid.
And why would Bruce effin' Wayne of all people need a tailor?  What is Alfred doing while all this is going on?  Bruce has been known on several occasions to put Alfred in a Batman costume and put him right in the path of armed criminals, but he won't bother Alfred with his tailoring needs?  Geez, how hard could it be?  I mean, Peter Parker was able to make that Spider-Man suit, and all those little webs are a lot more complicated than the Batman costume.  You know I'm right about this.
Hey!  Here's Something That'll Make You Think Twice! (tm!): 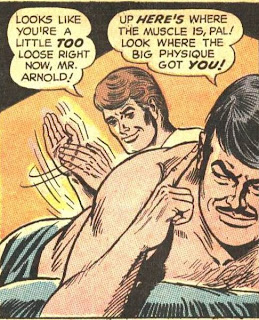 Don't ever use the words "tight" or "loose" when your hands are near another human being's butt.  Just trust me.
Detective #392 was a much better story.  This was my favorite line: 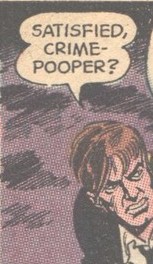 That's my new line whenever I'm inclined to say "I told you so."  The next time Beloved is wrong about something, I'm going to say, "Satisfied, Crime-Pooper?"  I wonder what her reaction will be.  Oh, well.  It's something to look forward to, I suppose.
See you tomorrow, Crime-Poopers!
Posted by Adam Barnett at 12:10 AM

I gotta tell ya. I have never had a full body massage, but if I ever do I sure hell am gonna get a woman to do it.

Is "crime-pooper" from the same fellow who gave us "sour-creaming?"

you forgot the dumbest part the vilian was the tailor, he was going through the trouble of snatching the label to now that he made them

I *thought* about that, Jacob, but then I wondered if the tailor didn't do that to throw suspicion off himself. They weren't very clear, to be sure...