A Post for You to Skim, Scan and Savor Monday! 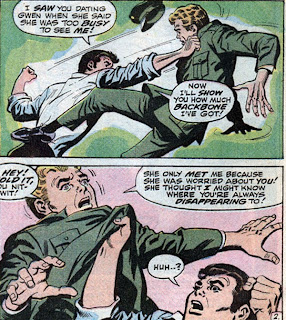 Oh, those dames.  They make us do the silliest things.  But I showed you this panel to lead into this: 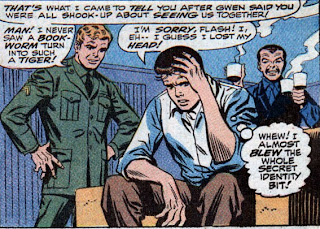 Okay, first check out Harry Osborn's terrible mustache.  Forgot he ever had one, didn't you?
More to the point, "I almost blew the whole secret identity bit"?
Go try and pick up a full-grown man with one arm and hold him above your head.  Go ahead.  I'll wait patiently.
Finished?
Okay, if you were actually able to do this without injuring yourself or someone else, I hereby accuse you of being a super-hero.  Flash and Harry really were morons.
Hey!  It's the Kangaroo!:

Kangaroos are just too silly-looking to model a super-villain after.  You basically end up with someone like the Leap Frog, and we all know how well that turned out.  In any respect, the origin of him gaining superhuman powers simply by living with the animals remains as stupid as it was when the Golden Age Catman and Black Condor had the same origin.  Shenanigans!
This is me being a brat: While 40 years have gone by, wouldn't Stan and Company love to get some of these feedback forms in the mail?  I'm not saying you should print it off and send it in, but.... 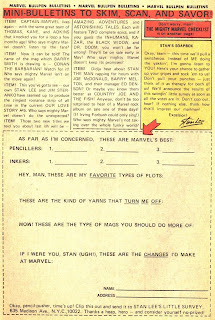 See, kids?  Before the Internet, giving fanboy feedback directly was a rare thing, worthy of taking up half a page in a comic!
See you tomorrow!
Posted by Adam Barnett at 12:53 AM

I printed three copies out and I will sign each as the Golden Age Catman, the GA Black Condor, and the Kangaroo. Let's just see if Stan makes the connection and follows it back to here.

I remember the Official Handbook of the Marvel Universe acknowledging just how much of an idiot the Kangaroo was...recounting his origin, they described him as "Not realizing the obvious fact that kangaroos can jump higher because their bodies are different than human beings'." The Handbook explained his powers by saying that his efforts to live like a kangaroo activated his latent mutant power. Handy that his mutant power corresponded so precisely to the animal he was imitating.

That's interesting, Erich! Of course, knowing Marvel as we do, they would say, "Of course he hung out with kangaroos! He subconsciously knew he had this latent power and this was how it was brought to the surface! Yeah! Or something!"