So, let's take a look at Detective Comics #389, which marked the official end of the Adam West Batman - influenced "camp era."  But that doesn't mean we can't find something to nit-pick, does it?
No, it most certainly does not.

Wait. What?  According to whom is it Bruce's duty to reform criminals?  I realize he wants to be socially conscious and all that, but I never thought of Bruce as being the kind of guy who believed that everyone was a good person waiting to come out.  Frankly, I think Dick would be more likely to see the Light of Human Kindness in people, and he's not buying it, at least not at that moment.  I realize I'm inviting a barrage of comments (and, what the heck, you all have been quiet lately), but Bruce's concern is more with the victims.  So there.
And now, Something That You Shouldn't Say to Someone Who Just Got Released from Prison!(tm!): 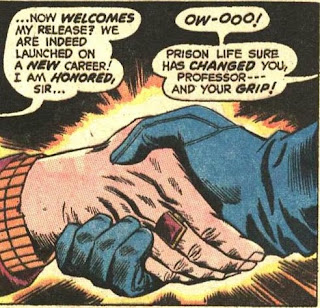 In a moment of self-awareness, Bruce starts to realize that he just doesn't scare the bad guys like he used to.  He felt that perhaps the "shock value" had worn off.  Frankly, I think it was all that jumping around on giant typewriters and all those trips into outer space that cost him his street cred, but what do I know?: 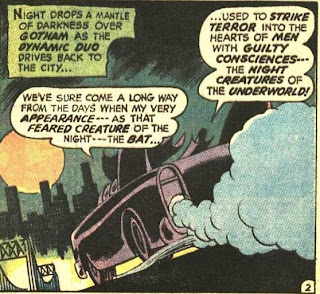 Yeah, maybe a change of image was in order.  Something like: 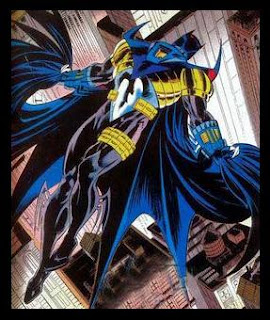 YEAH!  Wonder Woman fighting a Nazi-trained giant ape!
Eisner Award Committee, it's spelled B-A-R-N-E-T-T.  I look forward to hearing from you .
See you Monday!
Posted by Adam Barnett at 9:47 AM

Nazis and Apes just go together...like peanut butter and chocolate. Throw in a dinosaur and you're GOLDEN!

"All the world is waiting for you"

I think that when we are quiet that that means that you are on the right track.

"Prison life sure has changed you, Professor - and your grip!"

"And my HEARING, too, Mr. WAYNE! Geez, you'd think you wouldn't just whisper your secret identity while I was standing a few feet away!"

is it me, or does batman's "new look" and posture in that one panel come off as "Camp gay"?
it was like somebody from Marvel in the 80's gave batman a makeover.