I'm Heading Out for Some Coke Monday!

Fair warning, gang!  Wednesday's post is going to be the last one for this week before I go on hiatus for the remainder of the year.  Loves ya though I do, I needs a little down time from everything.  Well, I'm actually going to work on Hero Action Persons so I can get a submission ready.  Anyhoo, pace yourselves accordingly.
Meanwhile.... 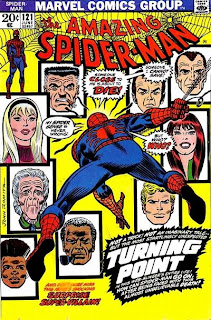 Spider-Man was very hardcore about managing his Facebook Page...
And I'm sorry, but Aunt May looks ridiculous.  I mean, they drew her like she was 110 years old.  Did they have to make her so decrepit?
Hey!  It's time for Fun with Out of Context Dialogue!(tm!): 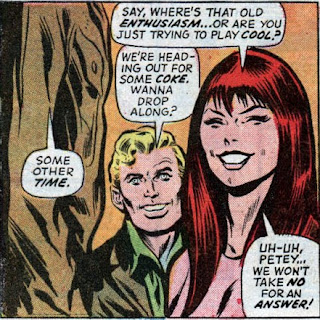 I think I saw this scene in an Afterschool Special when I was a child.  I think it starred Helen Hunt.
That above bit of goodness came from Amazing #126, which also had this event that had far-reaching and permanent consequences not only in the life of Peter Parker, but every comic book character out there.  Even Jughead.  Yes, it was The Death of the Kangarooooooooo!: 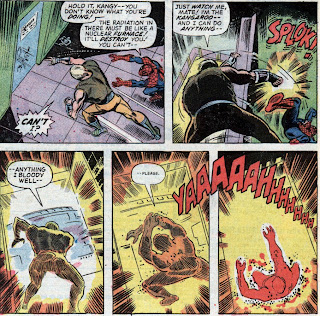 Okay, so really no one cared, which is kind of sad.  Some of his DNA was used to create a zombie-like creature years later, and that's really about all there was to that - two appearances, death, zombie.  That's show biz!
See you tomorrow!
Posted by Adam Barnett at 12:05 AM

Well then. Safe holidays ahead of time, Adam. Looking fwd to Snatcher Bodies as it moves along.

Here's an idea. What if one day you told every commenter to post in Out of Context Dialogue TM?

What do you mean Wayne?

Also I just read in wikipedia that there were 2 zombies made of him and that there is another dood later that took that name and had similar powers. BTW Kangaroo wasn't suicidal. He had an implant in him that was forcing him to follow commands from someone. Just thought that peoples that didn't feel like researching it might still wanna know.

His death scene is better if you read it out loud in the cheesiest fake Aussie accent you can manage.