I'll Do Some Sour-Creaming of My Own! Wednesday!

Here's something you didn't know about the Batarang, courtesy of Detective Comics #386: 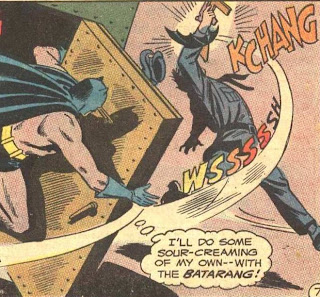 Yes.  You can sour-cream a guy with it.  Whatever that means.  WSSSSSSSH KCHANG!
By this time in the series, the Elongated Man and his very nauseating powers were no longer the back-up feature.  Instead, we saw signs that Robin was starting to branch out on his own, both in the original Teen Titans series as well as his own back-up feature in Detective.  The stories were less about crime, and more about social issues.  F'rinstance: 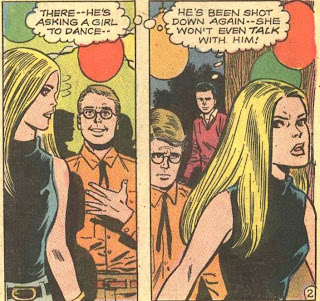 Well, maybe Bolo Tie there shouldn't be hitting on the girl who spent three hours on her appearance.  She just might be a little superficial and unwilling to get to know the "real you."
Seriously, guys - ask a nerdy girl out.  Nerd girls rule.
Batman hides in plain sight as freewheeling playboy and philanthropist Bruce Wayne: 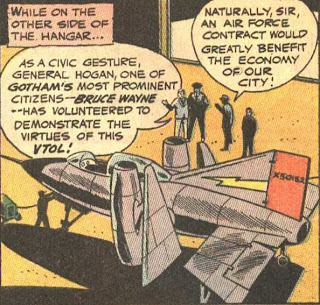 Apparently, socializing and philanthropy involve learning how to fly experimental jets.  No, Bruce, there's nothing suspicious about that at all.  Here's a hint: Richard Branson does stuff like that because it's consistent with his public persona.  When you try to act like you are just a bored playboy with a heart of gold, doing something like this might call attention to your more adventurous side.
Hey!  It's time for Fun with Out of Context Dialogue!(tm!):

I've just found my new line for ending conversations.
See you tomorrow!
Posted by Adam Barnett at 12:18 AM

"Sour-creaming?" Is that like just "creaming" someone (as in beating them up, not the other thing), but in such a way that they're sour about it afterward?