No Wonder He Needs a Computer to Find Dates Friday!

Are you reading Snatcher Bodies? You should.
Meanwhile, from Detective Comics #595.  We all know Batman can handle a truck driver...

... but we didn't know how he would fare against a Centaurian Zheerfang!
And now we do.  We also know that spell-check refuses to acknowledge "Centaurian Zheerfang," so be advised.
From Detective #395, with that purty, purty Neal Adams art: 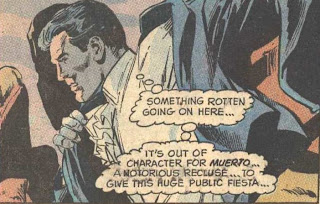 I'm not fluent in Spanish, but I'm pretty sure you don't want to go to any gathering hosted by a guy named Muerto.  You just don't.
Hey!  It's computer dating circa 1969, courtesy of Detective #396: 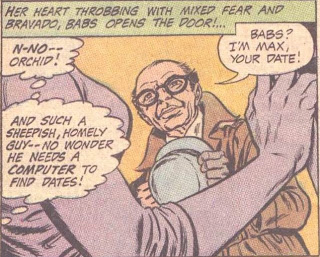 See?  Everything old is new again.  Except he didn't have to explain why he used his high school Senior photo as his profile pic.
And don't knock the sheepish, homely guy, Babs!  It worked out fine for Beloved!
See you Monday!
Posted by Adam Barnett at 12:34 AM

"And don't knock the sheepish, homely guy, Babs! It worked out fine for Beloved!"

I am shocked! Shocked!!!

Please tell me that I am not the only one who noticed that Uhm Hmm "appendage" sticking out from the Centaurian Zheerfang's "diaper" thingy.