Spider-Man! Spider-Man! Barooms and Krashes Like a Spider Can Wednesday!

As I coast into my Christmas staycation, it seemed appropriate to discuss that time when Spider-Man found himself weighed down by material possessions, namely the Spider-Mobile: 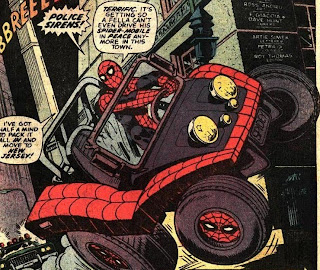 In the storyline (Amazing #130), Spidey was approached by Corona Motors to promote their new non-polluting engine by installing it in a Spider-Mobile.  Said vehicle was designed and built by Spidey and the Human Torch.
From the beginning, Peter had his reservations, but the lure of easy money via endorsement deals were too much, and the rest is cringe-inducing history:

Remember when I said the problem with U.S.1 was that car chases just weren't interesting in comic-book form?  Yeah, that still applies.  Especially when you're used to seeing your hero swinging among the tops of skyscrapers.  It's like buying an issue of Plastic Man and watching him do his taxes.
Peter would, from the onset, call the Spider-Mobile "hokey" and a "fiasco," so at least no one had any illusions that this wasn't a bad idea.  And for that reason, it's a rather cool part of Spidey's history.
That, and the fact that Spidey lost it by accidentally driving it off a pier in ish #141: 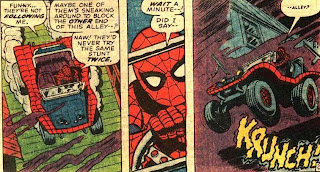 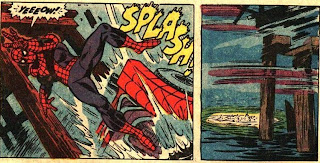 That was some brilliant writing by Gerry Conway.  A true Moment of Comic Book Greatness (tm!), to be sure.
Everyone have a great holiday season, and I'll see you again on January 3rd with the 2010 Year-End Craptacular!
Posted by Adam Barnett at 12:56 AM

I'm surprised no one has salvaged the Spidey-Mobile out of the drink, retro-fitted it with lethal weaponry, and gone on a rampage (which would, of course, be blamed on Spidey by JJJ!)

Thanks for giving us a huge laugh for the last post of 2010!

Britt: Something very close to that actually did happen in Amazing Spider-Man #160. The Tinkerer salvaged the Spider-Mobile from the bottom of the river, and used remote-control to send it after Spidey.

What happened to the old Spidey sense there? And how is January 3rd a "year-end" anything???

If I remember right, the spidey-mobile was part of a deal with a toy company. They wanted to produce spiderman toys, but felt a need to also sell a "spideymobile" accessory. The sales guys required the writers to write it into the comic book, so the writers wrote that preposterous story, partially as a protest against the salesmen's stupidity.