No, I've never heard of him either, but every dog has his day. And this is the day for..... The Black Avenger! 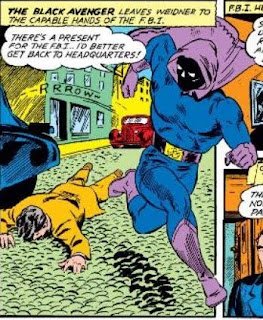 Is it just me, or does All-Winners kind of fail to live up to its title most of the time? I certainly don't think this character was a winner. I mean, they've upped the Bitchin' Factor for almost every character ever created by a desperate cartoonist with a deadline and a mortgage to pay since 1939, but I'll wager this is the first time you've ever seen The Black Avenger.

And there's really not much to say about him, not that it's keeping me from devoting an entire day to him. I don't know why The Black Avenger wore a lot of lilac. I suppose calling yourself "The Lilac Avenger" would only get you a lot of rude and obscene gestures every time you stepped out the door, but it doesn't change that The Black Avenger wore a lot of lilac and very little black. I'd put him in the Costume Hall of Shame, but I'm afraid I'm missing some genius color scheme that's going right over my head.

Speaking of heads, I don't think he had any powers, but he could take a crowbar to the melon:

There's really no explanation as to why he has this power. I don't think it really constituted a power. He just was one of those guys that could shake off a smack to the head, I suppose. I can't imagine that being much of a power when it comes to going on the attack, but it's certainly something if you're going to be smacked from behind on a regular basis. So, um..... fear the unusual bone density of the skull of... The Black Avenger!

He did have a pretty good wit on him, though: 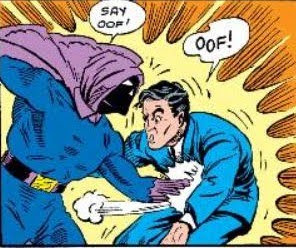 Hee! That was kind of a Deadpool/Spider-Man sort of remark, and we all like guys who can crack a joke, don't we? So.... fear the quick wit and unusual bone density of the skull of... The Black Avenger!

You watch..... Marvel will revive The Black Avenger, and you'll already be in the know. Making my readers that much more awesome is but one of many services of this blog. You're welcome!

See you tomorrow!
Posted by Adam Barnett at 2:44 PM

Acutally, Marvel/Dynamite did a story where the "New" Avengers get displaced in time and end up in 1940s Marvel U where they can't be seen or recognized because it will effect the future or some thing, its a whole cosmic cube thing. Anyway, the New Avengers disguise themselves as '40s heroes and sure enough Black Avenger is there. Who does Marvel put behind the mask? None other then Power Man himself, Luke Cage. No the irony is not lost on him either. It was the Avengers/Invaders series that finished up in June of this year. Oh and I really like your blog. Great stuff. Keep it up.

That "Say Oof!" panel is freaking hilarious, probably even more so because it's out of context here.

I've gotta make that my avatar or something.

J.A., you are absolutely right. The funny thing is, I just read Avengers vs. Invaders over the summer and I didn't recall Luke as the Black Avenger until you said something. You're right of course. Thanks!

It is NOT spam! This is a human made message specifically created to demonstrate the strength of our automated software and its potential of reaching wide variety of audience in an effective and time saving manner.

We are a group of veteran [b]Xrumer[/b] and [b]Search Engine Optimization Experts[/b] that provide [b]Affordable, High Quality, [url=http://xrumer-blast.com/marketplace/seo-products/]SEO Service[/url][/b]. Post your message on thousands of forums, message boards, blogs and journals and gain organic traffic in a matter of days! With the help of our [b][url=http://xrumerblast.livejournal.com/]Search Engine Optimization Experts[/url][/b] your [b]Store URL[/b] can appear on [b]8553[/b] forums and journals. Receive almost instant increase of your search engine rank, Get thousands of quality backlinks directly to your Bussiness without lifting a finger!

Our goal is simple; we want to make you and your website on the top of every search engine so you and your family can enjoy the comfort of steady, automatic income without leaving your home. Trough our [b][url=http://xrumer-blast.com/contact-xrumer-blast-com/]SEO Expert Advice[/url][/b] you will receive one of the best support seen in the industry. As part of our [b]Search Engine Optimization Services[/b], we take care of everything for you, from Optimizing your Website for search engines all through ranking your Blog on the first page of your Google.

For more information regarding [b]Search Engine Optimiztion[/b] and [b]Xrumer Blast Services[/b] check out [b][url=http://xrumerservice2010.wordpress.com/]Xrumer Blast[/url][/b]. Our site includes everything you need to order your first [b]Xrumer Blast[/b], you can create the most appropriate message (Project) to suit your Website, send us the information and after the payment clearance we will start working immediatly!

greetings to all.
I would first like to thank the writers of this blog by sharing information, a few years ago I read a book called costa rica investment in this book deal with questions like this one.

Hello .. firstly I would like to send greetings to all readers. After this, I recognize the content so interesting about this article. For me personally I liked all the information. I would like to know of cases like this more often. In my personal experience I might mention a book called Generic Viagra in this book that I mentioned have very interesting topics, and also you have much to do with the main theme of this article.