Back in 1975, when I was but a wee tyke of 7, there were no trade paperbacks collecting previously-published stories. But that didn't mean DC and Marvel were above reheating previously-served soup and re-selling it under a different name!

And I was a sucker for reprinted stuff, mostly because the publishers could shove a lot of content into each issue and sell it for a song. 48, 64, even 100 pages for 60cents was not unheard of. This is why I cringe when 28 page pamphlets are sold for nearly three bucks a pop.

Frankly, I blame distribution. Back in the day, we bought our comics from metal racks in groceries or convenience stores. No retailer expected to keep his whole operation running from the sales of comics. They were incidental items that didn't take up a lot of floor space with a decent amount of merchandise turnover, so the prices were kept well within the range of children. Not today. Now, a comic book shop has a direct distributorship and your purchases are the only thing keeping the doors open. It's a heavy financial burden all the way around, and the end result is that children no longer have the kind of access to comics we did. And that makes me sad.

Yes, comics are much better now and cost more to produce. But three bucks per title every month is limiting, even to crusty old farts like me with regular jobs. That is what is killing the industry, and it's a shame. That's why I give my old comics to younger kids by the bagfulls, and if you know of a kid who might benefit from a little imaginative, often-silly storytelling, I encourage you to go through your collections and pass along the wonder.

Okay, climbing down from the soapbox. See what happens when I have a long weekend?

The year was 1975, and I was a sucker for Super-Team Family. It was an anthology book! And it had weird team-ups in it (the Creeper and Wildcat pairing from the second issue is one of the greatest things to come from the Bronze Age), varying from one issue to the next! How could I not plunk down one thin dime and two thick quarters each month?

It was in the first issue where I read the most inconsequential cross-over from the Golden Age: 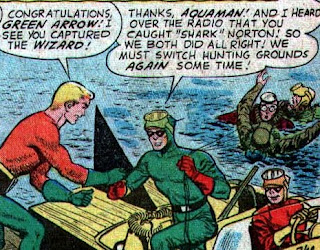 Yup. The Golden Age Green Arrow and the Golden Age Aquaman met each other for one panel. That was pretty much the extent of it. They shook hands after swapping hunting grounds. Pulse-pounding stuff, don't you think?

That was pretty much on par for what you could expect from characters that were only surviving because they were back-up features in Adventure Comics in the late 50's and early 60's, which in turn was making it only because Superboy was the flagship character, and he was pretty popular at the time with boys who were afraid to talk to a real-live girl.

But even with low expectations, a lot bugged me about this team-up. The gist was that a Green Arrow bad guy who only showed up once before that I can recall was committing crimes under water, and an Aquaman bad guy was committing crimes on dry land. I can understand the Wizard's logic to retreating under-water, but Shark's decision to go to dry land where everyone this side of the Red Bee could kick your ass didn't seem like such a great idea.

But, hey, that was his decision. So, we just send Aquaman to go after the Wizard and Green Arrow to put a few pointy ones into Shark, right? No, that would be too easy:

Okay, I'm pretty sure that Shark had only fought Aquaman once before, so I hardly think Arthur was the only one capable of catching him, particularly when you consider that Shark had given himself a tremendous disadvantage by going to dry land. Why they put it all on Aquaman, who wasn't even capable of carrying on a simple conversation while half of him was in the ocean that day, I didn't understand. Even at age 7. 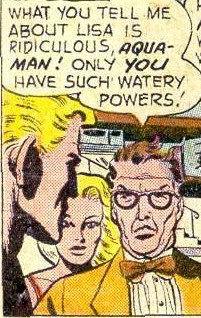 This didn't come from that particular story, but I'm trying to show just how limited Arthur was back in the day. Captain Marvel? He was the World's Mightest Mortal. Superman? He was the Man of Tomorrow. Aquaman? He was "watery."

But no one listens to me, ever. So, Aquaman goes up top to cause major floods so he can be relatively competent by Aquaman standards, and Green Arrow goes scuba-diving. Oh, and apparently develops latent telepathic powers:

What the frick was that? Seriously, folks, when did Oliver get the ability to communicate with an octopus? I was willing to suspend my disbelief as much as the next 7 year-old boy, but come on! You've got to give me something to work with here.

So, the next time you find yourself cringing at the reboot going on at Amazing Spider-Man, just remember what I had back in the day: Green Arrow mentally communicating with an octopus.
Posted by Adam Barnett at 12:15 PM

Maybe Topo is the telepath. Sure G.A. mentions his "telepathic power", but he clearly expects Topo to talk to all the other fish.

What kind of telepath can only communicate with one creature?

Arrow is sending his thoughts for Topo to pick up. He might think he's using "telepathy", but really, Topo's the one with the more sophisticated brain (as Ollie's history should demonstrate).

That being said, I came from an earlier era than our penny-pinching host and when I was 7 and went to the store with my 36 cents was sooo chagrined to learn I could only buy 2 30-cent comics that day! A heavy lesson in economics was dealt to me then.

By the way, was that a fire-breathing sea serpent under water?!?

He just used a Telepathy Arrow.

Did anyone notice that Green Arrow has a charming GREEN wetsuit, while Speedy has the cutest little RED one? Even their scuba equipment is color coordinated.

The idea that Topo is the one who is telepathic is delightful, by the way.

And how is that monster breathing fire...under water?

I love how the feathers stay on their hats underwater.