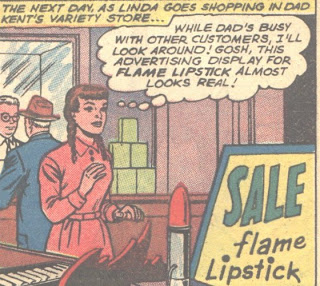 Okay, I'm not a marketing guy (obviously, because no one has ever heard of me and I should have been famous long before now), but I would never name a lipstick "Flame." 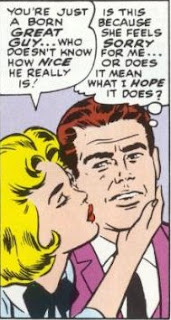 I know the answer! If she calls you "nice" at any time, it could mean potentially anything but what you're hoping it means. 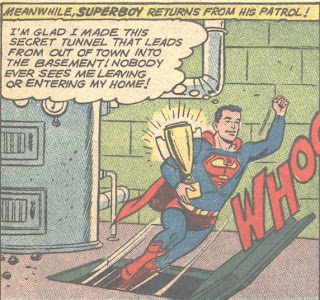 But when they do see me, they see me carrying a big-ass trophy. That way, they know how awesome I am!

Seriously, this was Superboy's first appearance in the story. He was apparently just flying around "on patrol," and someone either handed it to him like you hand a paper cup of Gatorade to a marathon runner, or he just got it for himself as a little pick-me-up. Either way, I'm liking him less and less each day.
Posted by Adam Barnett at 12:24 PM

I do hope that he remembers to close the hatch of that secret tunnel. Otherwise, the furnace repair guy is going to get a HECK of a surprise.