Be Kind to Animals Friday!

Wow.... another 3 day weekend! Can you believe it? It's President's Day, and even though Dubya is currently in office, I can't turn down a paid day off. So, I'll be back Tuesday with more nonsense.

Meanwhile, let's show some love to our furry friends:

Preach on, brother. If it wasn't for Krypto and Krypto-related silliness (I love the expression on Krypto's face), I don't know if I could have toughed out Adventure Comics for this long. How many more of these do I have to read before I can start making fun of the Legion, anyway?

But, yes. Krypto has it, Superham does not. If Superham were doing this, it would be silly: 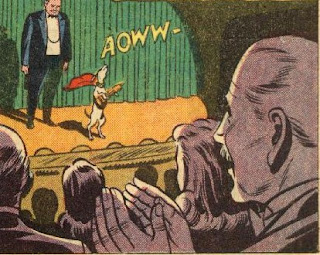 But a dog playing the uke and singing? That's good stuff. And I love the crowd. I'm going to put Frampton Comes Alive on while looking at this panel and see where it takes me.... hm, now I'm in the mood to play Guitar Hero again.
AOWWWWWWW!!!! 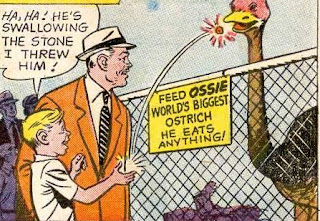 Ha ha haaaa! Yes, Billy! That's great! Of course, an ostrich eats grass and you're probably going to give him a painful impaction in his bowels, but as long as we're getting a chuckle, that's what really matters! Delightful!

But even more disturbing is this: 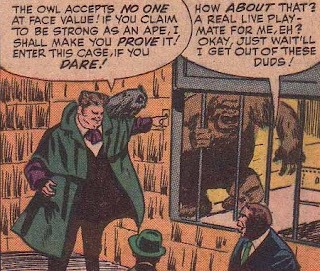 I'll show you! Just let me get out of these duds!

Um... I don't recall saying you had to do anything naked with the gorilla.

No, seriously. I was thinking you'd just arm-wrestle it or something.

No, no. Sometimes you've got to show whose boss....

This can't possibly end well for anyone involved.
Posted by Adam Barnett at 12:39 PM

That Krypto pose of snobbery makes that panel work in *so* many ways!

So, just how smart is Krypto? He can think in complete English sentences (which is more than any child in Unca Mort's books could do). Why can't he communicate in any other way? Type, spell, etc.

I wouldn't exactly refer to an ostrich as a furry friend and they do swallow pebbles to aid in digestion. But when one posts a sign that challenges Ossie can eat anything, I think the boy is perfectly justified in tossing a stone. Look at some of the trash there already planned for dinnertime.
You made me openly giggle upon reading the line about getting naked!

Yeah, actually young Billy was doing that Ostrich a favor! They need to eat stones to line their gizzards. No teeth, so the rocks do the pulverizing. Cool, eh?

Now if it was a KRYPTONITE rock, then things could get a little out of hand.

Sallyp, I thought the same thing. It looks a bit like gold kryptonite, which could prove somewhat hazardous.

I did not know that about ostriches. Who says we don't get smartified around here?

Krypto, by the by, would communicate with Superboy in a series of barks kind of like Morse code. (I know - sometimes you'd be happier not knowing the answer they came up with)

Cool: Ostriches line their gizzards with stones they routinely swallow to help pulverize the tough scrub they digest.

Ultra Cool: So did Dinosaurs.

What's wrong with a bit of naked Gorilla wrestling?

I'm off to line my gizzards with rocks!