It's the End of the World, and It's Friday!

I knew I was getting older when I found myself hating music that people under the age of 25 seem to enjoy. I also find myself, on a painfully regular basis, not knowing who the guest host is on Saturday Night Live. I don't think Dane Cook or Carlos Mencia are funny, I don't find Paris Hilton attractive, I think John Grisham is a weak writer, and don't even get me started on how stupid American Idol is.

So, I acknowledge that I'm just not in step with the times. I accept that. 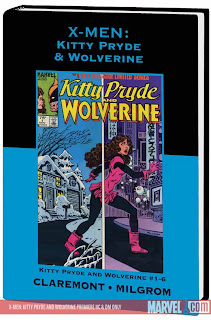 It's a trick question. You can't. There is no explanation, no excuse, no justification for bringing this thing back from the dead, much less putting it in hardcover.

For those of you that are fortunate enough not to be familiar, Kitty Pryde is to the X-Men what Cousin Oliver is to The Brady Bunch. She was brought on board by Chris Claremont to become the focal point of stories and basically signal the end of when any of the X-titles were actually worth reading.

Not that they didn't try. Lord, they shoved her down our throats for years. But she didn't have a unique ability (she could phase through solid objects like the Vision, but couldn't alter her density or be of any practical use in a fight like he was), and they couldn't even stick with a name. Let's see, we went from "Sprite" to "Ariel" to "Shadowcat" to "Reverse Mortgage" or whatever they call her now.

This Kitty Pryde and Wolverine mini-series was from the early days when (even more so than now) you could attach anything to Wolverine and it would fly off the racks. But keep in mind that (a) It's a mini-series from Marvel circa 1980's (which should be enough to scare you right there) and (b) Kitty Pryde got top billing, so you know at least half the content focuses on her.

And it's in hardcover. Not even a paperback, the thing is in hardcover. It's like rolling a turd in powdered sugar. Do not be tempted. Thus endeth my public service for the day. 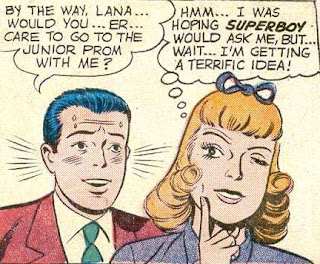 Not to be shallow or cruel, but is this the face of a girl who can afford to be choosy? Bird in the hand, sweetheart....

My joke of shame for the day:

What's worse than getting crabs?

Well, what's worse than getting molested? 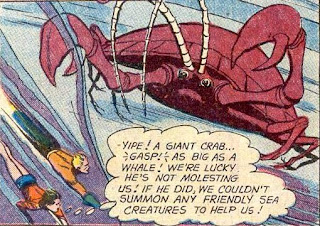 Getting molested by a crab.

Thank you, thank you! I'll be here all week! Don't forget to tip your waitress!
Posted by Adam Barnett at 3:10 PM

Am I the only one who thought it was weird they kept pairing Logan with young girls? Batman hangs out with Robin and people call him a pederast. Wolverine hangs out with Kitty Pryde and Jubilee and nobody says a thing. Sick is what it is.

Oh yes, the Kitty Pryde/Wolverine thing is so crap.

A Bad Bad mini-series in Hardcover.
Why? No Logic.
Who asked for this? Donald Trump?

I remember a funny cartoon when this came out. It was Kitty with the TMNTs and they were like "What's the matter? Ain't you ever seen a teenage mutant Ninja before?"
Oh, well. I know I have the caption a bit wrong but it WAS funny then.
Still, I always thought that mini plus a few dozen other mutant mini-series from the 80s were the worst.
There was another one with mutant kids and some kid who had mutant pet lobsters. Awful.

The other bad ones were Mephisto vs. the FF and Mephisto Vs. The Xmen. He never goes away.

I know that pose is supposed to be someone's (Al Plastino's?) idea of someone's brain working, but -- seriously -- what the hell is up with Lana's face? She looks like she's melting.

"There was another one with mutant kids and some kid who had mutant pet lobsters. Awful."

Alan, were these lobsters the MOLESTING type?

I know exactly how you feel Adam. I'm sitting there quietly listening to Springsteen, and my kids start blasting something called "Lincoln Park", or something. Really...kids today!

Ahem. I blush to confess that I actually OWN the entire Kitty Pryde/Wolverine mini-series. This is not something that I am proud of. Gosh, it was horrible. The plot is bad, and the art is even worse. Exactly who Marvel thinks is going to go out and BUY this horor...in hardcover no less, has me baffled.

But the giant molesting crab is fabulous.

I read that mini-series when it came out and I liked it. Of course I was 14 at the time.

But it was the series that grew up Kitty from teenager to adult.

Does it really re-read that badly?

Speaking of Wolverine and young girls, I remember that Claremont also teamed him up with the little pigtailed kid from Power Pack, who was maybe five years old. I think it must be Claremont's "Lone Wolf and Cub" obsession at work.

Re: Kitty Pryde, I always got a chuckle out of the artistic continuity clean-up Claremont had to do, after John Romita, Jr. drew her with that godawful short haircut she got in the mini, in an X-Men story that took place before it. He had to ret-con it into a wig, that just happened to look like a haircut she was forcibly given later. Which meant that her "boyfriend" Colossus broke up with her while she was wearing a wig, which sounds like something that would happen to a Lynda Barry character. (Now, Lynda Barry would be the perfect writer for a Kitty Pryde comic!)