Oh, I'm not finished with Superboy by a long shot. Heck, we haven't even reached the Legion yet! But let's cleanse our palate a bit with a look at Daredevil: 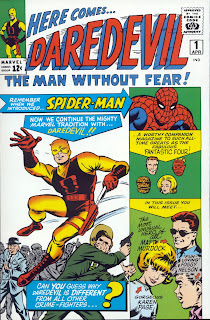 The cover of this first issue was one of the greatest marketing attempts, ever. Spider-Man and the Fantastic Four are on the cover, so we're going to start off huge with a big cross-over between the three titles, aren't we? Nah. Spidey and the FF are nowhere to be found inside, but to be fair, the cover never actually promises you'd see 'em.

And check out those hairstyles on Karen Page and the Invisible Girl. Va-va-va-voom!

And how many faces can they shove onto a cover, anyway? I've seen fewer faces in a copy of Where's Waldo?

My personal favorite is Foggy's portrayal. Excuse me, "Fun Loving" Foggy Nelson's portrayal. Was that supposed to be some kind of nickname that never caught on? Because no one calls him that. Ever. In fact, "Foggy" is a nickname, so I don't know why you'd give him a nickname on top of that. Is the fact that they put "Fun Loving" in quotes an indication that he's really kind of a buzzkill?

Regardless, Foggy is the worst attorney ever: 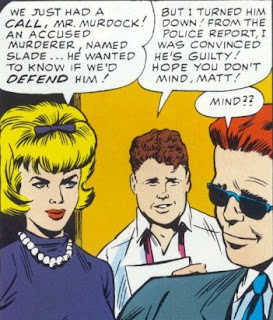 Yeah, Matt, I sent this high-profile client away because I read the police report and decided he wasn't entitled to a zealous defense. Because the police never lie, especially in their reports. And it's my job as an attorney to decide guilt or innocence, especially before I even get the accused's side of the story. And only good people are entitled to effective assistance of counsel, aren't they?

How did this guy pass the Bar Exam?

Don't mind me, Karen. I'm just looking at you "longingly." Hope that's okay with you. And don't ever change the craaazy way you smell. Because I'm smelling you. While I'm looking at you longingly. And did I mention that panties are optional in this office?

In-frickin'-credible. Why Foggy never got his own comic, I'll never understand.
Posted by Adam Barnett at 11:54 AM

Humm... So Foggy has enhanced sense of smell like Matt, or is Karen overdoing the perfume today?

I'm afraid that every male in Marvel around the early sixties (case in point: Reed Richards) was too male-chauvinistic, though, not only the Fogster... And Later, natasha Romanoff would be annoyed at Matt's insistence to call her "honey".

On hindsight, Foggy musn't have been a grand annoyance to Karen: in "Born Again", she considers Nelson such an innocent fellow, that she firmly believes that he is not the type of guy who would have seen any of her films... and, apparently, she's right: the guy has no idea about Karen's world-famous career.

Oh, yeah, Foggy should get an ongoing series, and Karen should be back ;D

Ah, the 1960s, when you could spend all day making lascivious comments to your female employees. How many secretaries did Stan Lee grope, I wonder?