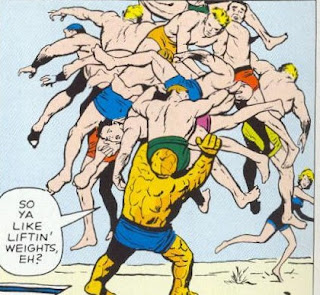 It's not so much that he was able to lift all these guys.... what impresses me is the fact that Ben was able to gather them up into one mass like that. I would think that after adding the 14th guy to the pile, it would have become difficult to catch anyone else. Seriously, I can't grab a handful of Fritos out of the bag without dropping a few, but it's like those guys are made of velcro. 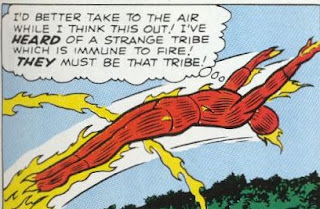 I dunno.... I guess it could be that other tribe that's immune to fire. I hear they have a little shop on West 45th. 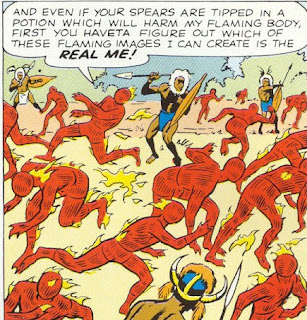 Ok, just..... no. It is frickin' impossible for you to create life-sized, animated duplicates of yourself, especially in those early days when you couldn't fly across the street without your flame pooping out.

However, if he was able to create flaming duplicates, I'm guessing that the natives will figure out to toss their spears at the one who is speaking. 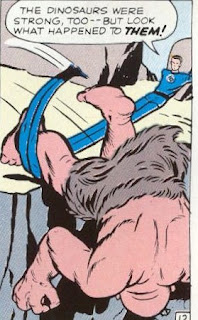 Um, no, Reed.... I don't think anyone knows what really happened to the dinosaurs. You don't have to be a jackass about it.
Posted by Adam Barnett at 3:45 PM

I am impressed that Ben was able to lift those guys and get such a face full of ass.

Man, I would hate to be the guy in the middle of that pile. That said, at least Ben has more on the ball than either Johnny or Reed, both of whom display some mindboggling stupidity.