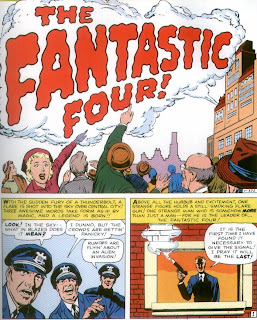 That . . . . is . . . . one HECK of a flare gun. It even punctuates. I'm going to start signing my name with an exclamation point and see if anyone notices or cares.

Ah, Johnny. He loves him the cars, and he's got it purring like a kitten, he does! 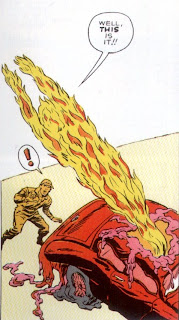 That is, until he decides to burst into flames and melt the whole thing into slag. True, he could have gone outside the garage before flaming on, and that probably would have been a lot more safety-conscious, considering the number of flammable things hanging out in a garage, but it would have meant having to walk fifteen feet, and even back then, kids were lazy. 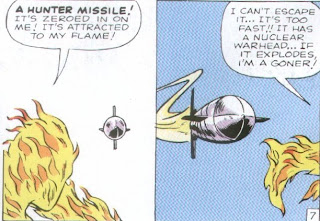 The initial sighting of the Torch freaks out the government, so they do what any responsible municipality would do.... they launch a nuclear missile. 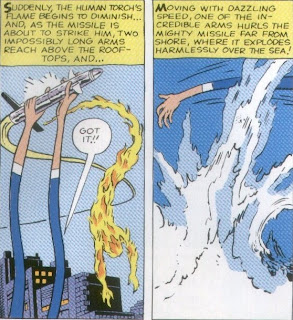 But Reed Richards is there to save the day with his incredible stretching powers and ill-fitting suits. Exactly how far do you have to throw a nuke for it to "harmlessly" detonate, anyway? 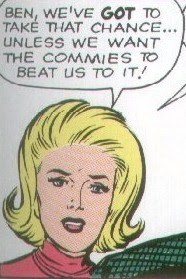 Note how politically involved Sue is. Nothing sexier than a woman in a bouffant barely old enough to buy beer spouting McCarthyism-era paranoia. 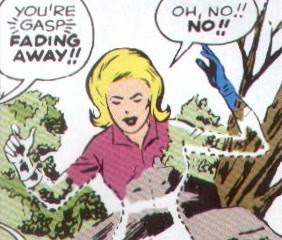 Readers worldwide hope against hope that Sue is really disappearing and will never be heard from again. But nope - she's going to be around to gnaw on our last nerve for the next 40 years and counting. 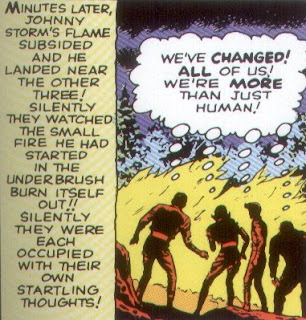 "Each lost in their own thoughts".... which happen to be exactly the same. Hey, Stan Lee ain't exactly paid by the word here, people!

And not to be picky, but that doesn't look like a small brush fire to me. Once you hit the wall of flame level, you've got something else entirely. 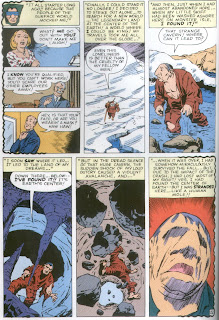 We are told the tragic origin on the Mole Man - lonely, ostracized, rejected from the world.... 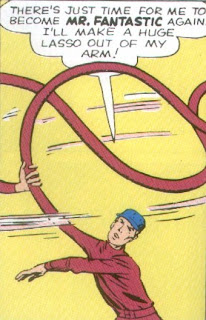 which doesn't seem to melt Reed's heart very much. His lack of empathy for the deformed soul surprises readers, considering he appears to have two left hands himself. 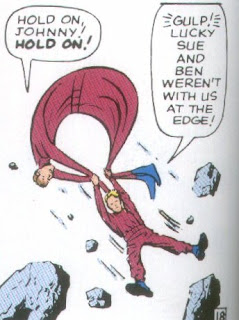 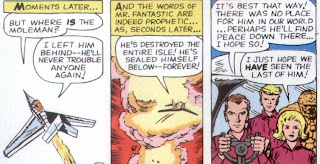 Because all internationally reknown research scientists can see the value in all living things, Reed ditches the lonely ugly man. (Reed: I told the Mole Man we'd give him a ride. PSYCHE!) He may have survived, but not if Sue has her way.

The clues are there people...Reed was a creep BEFORE Civil War!

And Johnny burning up the car that he was drooling over but a moment ago...has always annoyed me. Bet the garage mechanic was just THRILLED!

Adam, I am a Sue Storm fan. Still, I must commend you for your line about readers hoping to see Sue disappear permanently. It might be the cutest line I have read about Sue on any blog!