Is This a Rhetorical Statement? 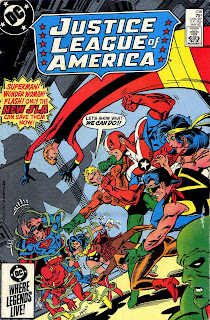 Um.... you can get the book cancelled in less than three years?

Seriously.... the team was led by Aquaman. Not that it isn't an improvement over Zatanna, but didn't he place dang-near dead last in a JLA reader's poll a mere few years before this new roster? That's like electing the asthmatic chubby kid who has coke-bottle glasses and headgear as Homecoming King. The joke wears off pretty quickly, and a lot of people are left standing around uncomfortably.
Posted by Adam Barnett at 1:58 PM