First, thanks to everyone for dropping me a line. We got smacked with some nasty weather, missing the actual blizzard by about 50 miles. We were deep in the white stuff, and everything was closed down for days. I'm very glad to be back in the saddle.

So, understand that I say this with love, but this goes out to everyone who is complaining about Marvel's Civil War. Now, I will tell you I am a "read it in the TPB" kind of guy, so I am clueless about what's going on and will continue to duck it until I can read the whole thing in two or three sittings.

But, folks, I'm a child of the 1980's. I turned 12 in 1980 and graduated from undergrad in December of 1989, so I associate the 80's as my growing up years. I am grateful to have gone through adolescence during such a colorful time, and wouldn't have had it any other way.

However, it wasn't all Dark Night Returns and Watchmen. Oh, no. When I was around 19 years old, the only civil war I had to read about was this: 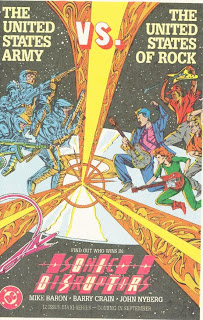 That's right - if I wanted civil war, I had to read about the United States Army vs. the United States of Rock. These guys were rocking too hard, and the Army was going to unleash major weaponry on their motorcycle cop mustaches and incredibly thin ties. 12 rockin' issues of Sonic Disruptors were comin' your way, baby!

Why? Well, the Congressional Hearings on legislation pushed by uptight busybody Tipper Gore were in full swing. Apparently, they felt that the answer to content that was inappropriate for minors was arresting record store clerks. What really annoyed me about the whole thing was that I was put in a position where I had to defend the artistic merits of 2 Live Crew and Twisted Sister, where I would normally like to throw rocks at how lame they are. It's like when everyone gangs up on Beth during MTV's Real World/Road Rules Challenge and I find myself actually feeling sorry for her. Dang it, people! Don't make me sympathize with Beth!

Anyway, the result of the brouhaha was that little "parental advisory" sticker you see on your CD cases, which is really all involved parents need to watch out for their children.

But, more importantly, this was Civil War, circa 1987. 12 issues. Granted, they were shipped on time, but really.... The United States Army vs. the United States of Rock. Anyone that unhappy with Marvel's Civil War series is welcome to trade with me.
Posted by Adam Barnett at 11:31 AM

Didn't "The Man" [not Stan] shut Sonic Disruptors down after 6 or 7 issues, probably for bein' too rockin'?

I'm pretty sure he did.... they were ROCKIN' TOO HARD and were BLOWING EVERYONE'S MINDS.... OOOOOH YEAH!

I can relate !! I turned 11 in 1980 , and I remember those days very well . ( So , who are you calling a whippersnapper , old man ?!?! LOL !! ) A bad story is a bad story . Look at Identity Crisis . There is another story FULL of plot holes !! In fact , look at the last issues of DC Comics Presents !! The series was ending , and they were just marking time . As such , they published inferior content , and were totally unconcerned by this !!