Did Anyone Actually BUY This? pt. 2 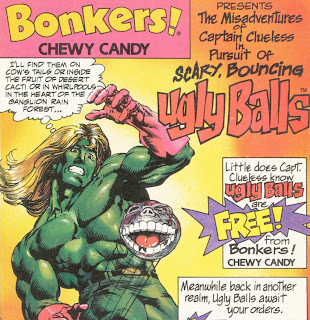 I guess the fair question would be, "Did anyone actually buy the candy and send off for one of these things?" I think you can actually find something like this in most toy departments, so it isn't the product itself I'm actually drawing to your attention.

No, it's actually the catch phrase at the bottom. You know the old chestnut of how you get a kid an expensive toy and they'd rather play with the box? Well, I was unmoved one way or another about the toy, but this is a phrase for the ages:

Isn't that great? I tell ya, in the 1980's, we should have chucked "Where's the Beef?" and made this the big catch-phrase. I think Mondale could have taken Reagan in '84 if instead of saying, "Mr. President, where's the beef?" he had gone with, "America, my ugly balls await your orders."

That would have been awesome. I would have totally voted for him.
Posted by Adam Barnett at 11:14 AM

AGAIN. Just after I leave my Centurions comment right above this post, lo and behold, another familiar ad. YES! I sent away for the damn thing, and the paint ended up rubbing off onto our sweaty grubby little 3rd grade hands within several days. They were a spin off of MadBalls, which I also had a small plastic coffee mug depicting them flying through the air and grossing people out. Kudos to you Barnett, and now I'm going off somewhere to feel the shame of playing with ugly balls as a child. HAHAhaaa

-Guilty as charged. I bought it.
-Mike