The Many Layers of the Storm Kids 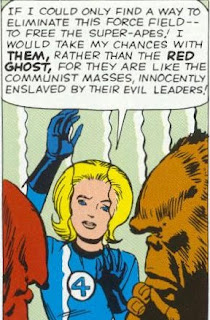 Sue is a compassionate gal. Her turn-ons include long walks on the beach, candlelight dinners, and spouting propoganda at caged animals. 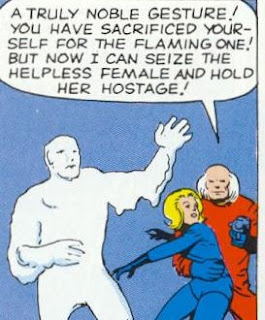 *Sigh*..... Sue, I'd quit making fun of you if you'd at least throw a punch when you were being taken hostage AGAIN! 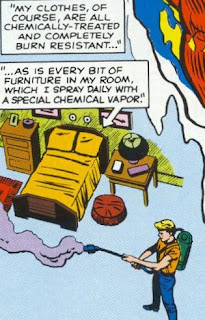 This is her kid brother, Johnny. And, although he can supposedly control his flame well enough to shave a guy with it, he'd rather not worry about it and just spray chemicals all over his room every day. Kind of reminds me of those old films where they showed little children dancing in DDT.
Posted by Adam Barnett at 9:19 AM

Well, I guess the constant exposure to chemicals explains Johnny, but what about Reed? Unless he's the one MAKING the chemicals!

Oh Sue, you are a total wuss.

The Red Ghost and his apes want Susan Storm....