The Red Skull: The Smartest Villain Ever.

So I came upon a print of a story from Captain America Comics #16, and I have to admit I'm impressed.  First, the Skull took advantage of sneaking up on Bucky to shoot him in the back with an arrow.  Now I am not saying this was an honorable or appropriate thing to do.  But let's face it: In a situation like that of Captain America and the Red Skull, you don't get bonus points for announcing to the enemy that you're about to shoot him or give him a chance to turn around.

But that was just the beginning.  Check out what happens when the Skull has Cap in his clutches. 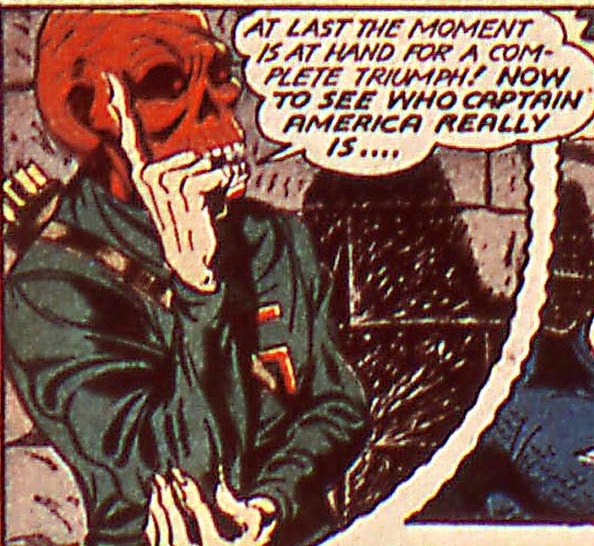 What?  No elaborate death traps?  No gloating?  No "I'll take the moral victory and let you suffer with the knowledge I could have known who you were, but chose not to find out"? 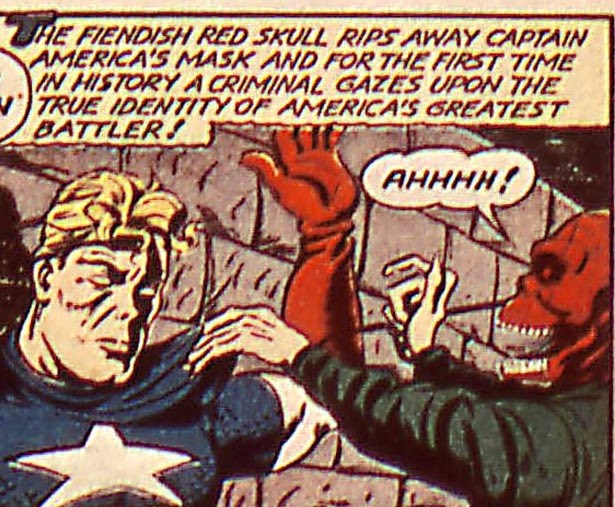 Well, surely that's a moot point, because if the Skull just knows what Cap looks like under the mask, it's not like he really knows Cap's identi... 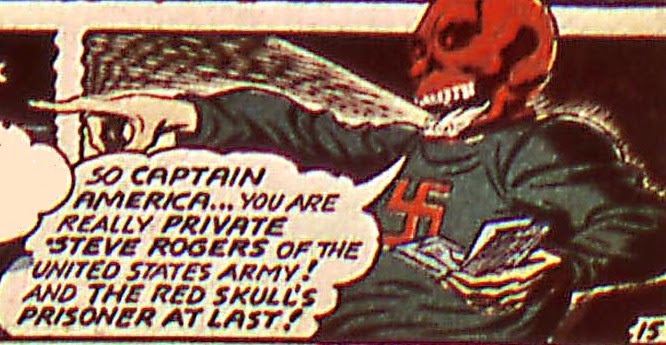 And, as an added bonus, we get to see the Skull wearing Cap's costume: 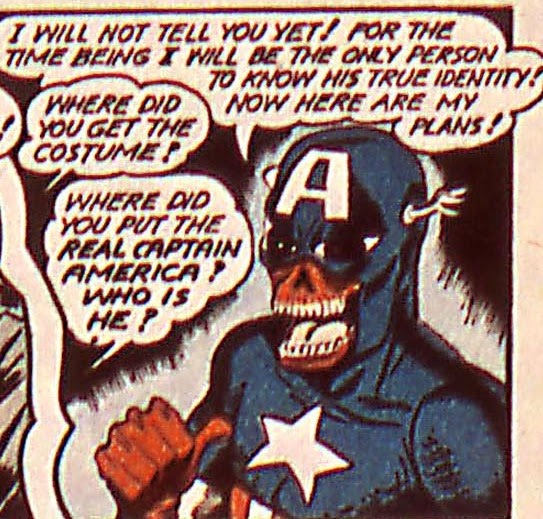 Anyway, check out this awesome artwork of the Skull's crime spree: 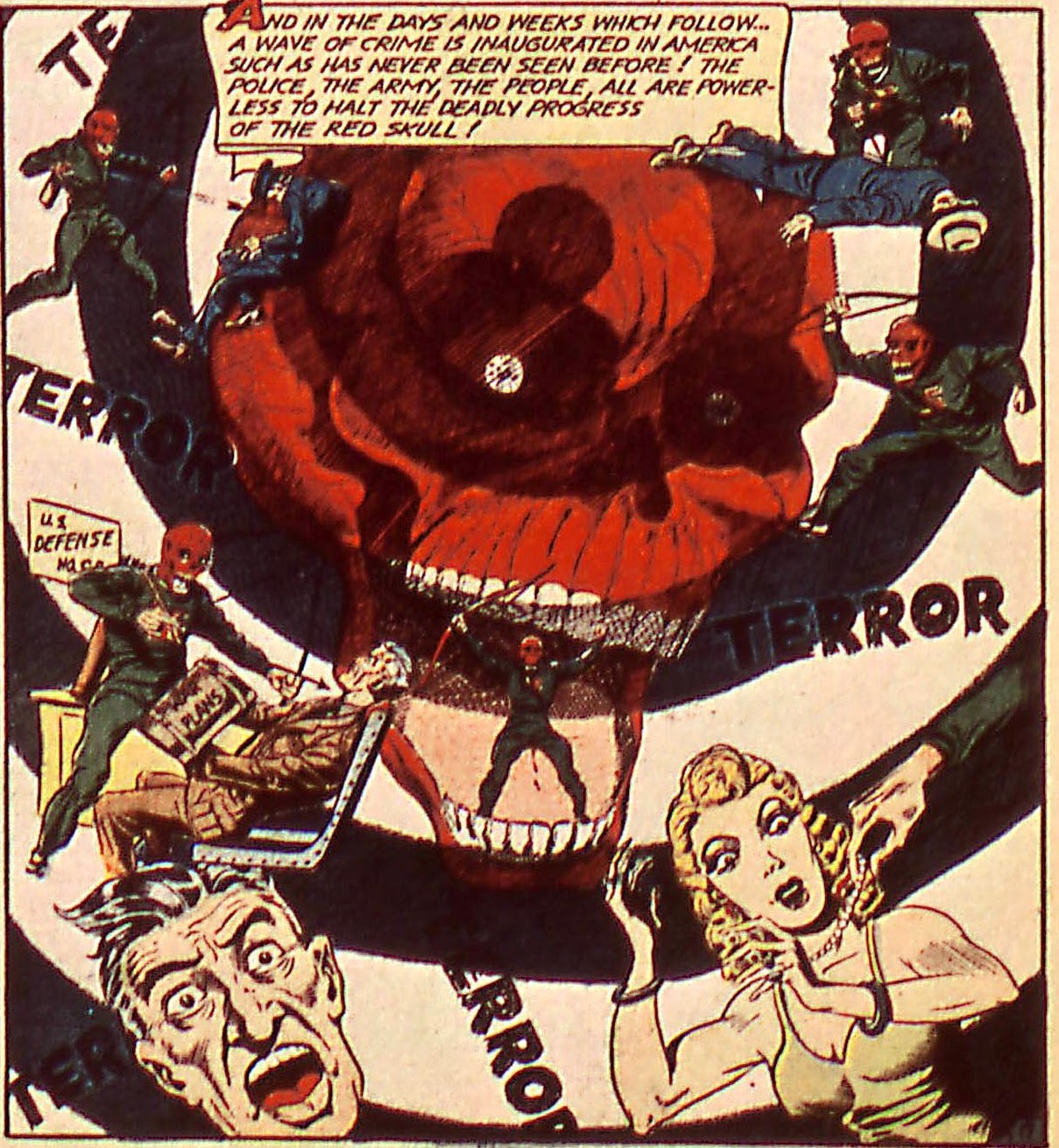 Then things get silly:

See how he's holding his shield in front of his face?  That's how he impersonates Cap.  And no one says a thing.  Military folks let the Skull into very sensitive areas without asking Cap if he could... oh, I don't know... take the shield down from his face.  It's bad enough that all you apparently need to have access to national secrets is a Captain America costume, but they aren't even pretending there's any security in DC.

But since the Skull knew Cap's ID, you knew how this was going to end: And now, courtesy of "YYEEEEEEEEOOOOOOWWWWWW," is another installment of CMNS Sound Effects Theatre! (tm!) 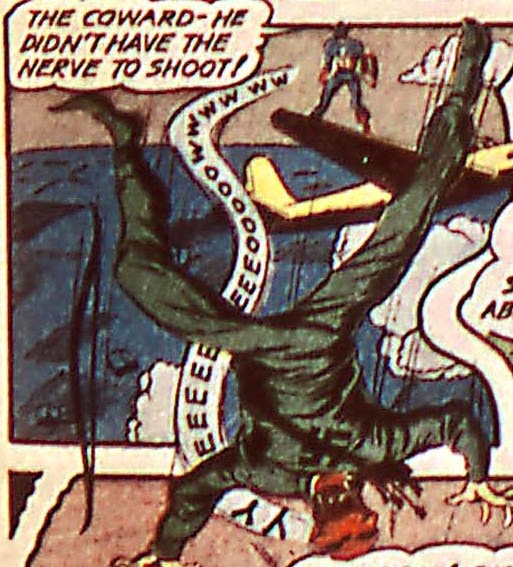 This has been CMNS Sound Effect Theatre (tm!) 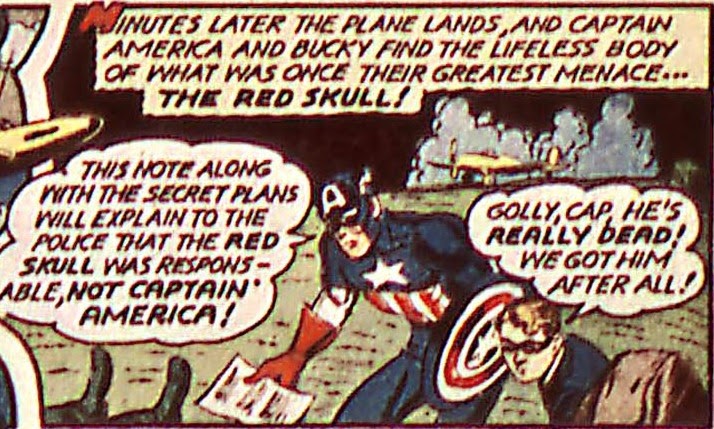 The secret plans, completely unauthenticated and easily forged, apparently do convince law enforcement that Cap did absolutely nothing.  But, to be fair, Cap was a white man in the 1940's.

Moving on to the Secret Stamp! 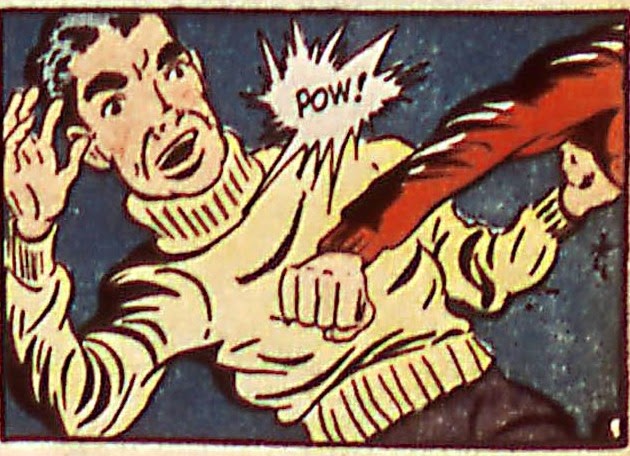 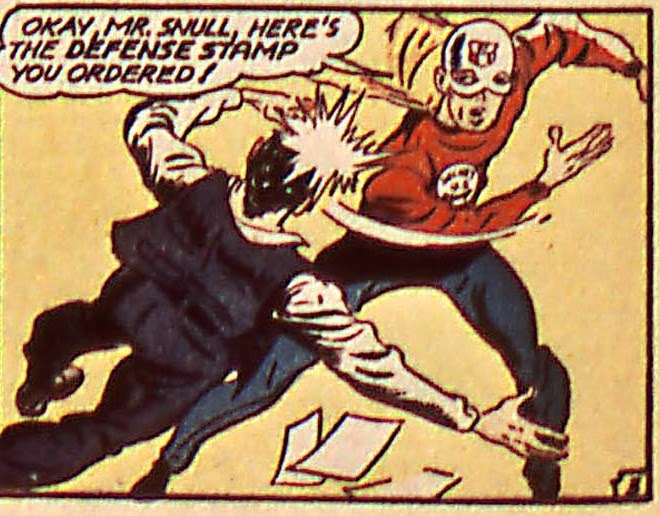 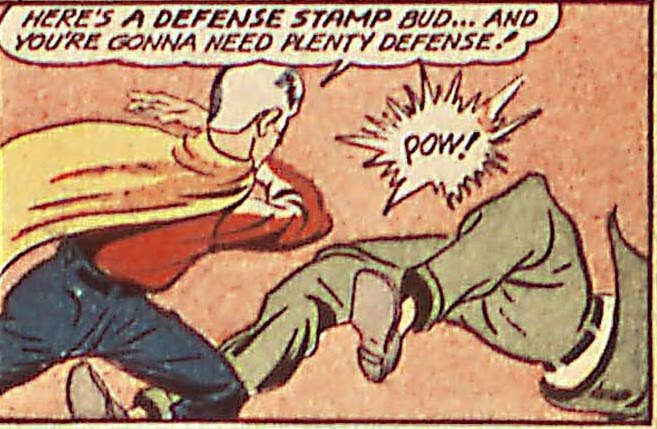 I don't know much about the Secret Stamp, but the man knew how to slap.

The Red Skull didn't have the nerve to kill someone? I thought he was supposed to be a murderous Nazi fiend.

Yeah, I don't know why he got all freaked out there. He was quite the badass in that particular tale up until then.

Since when does the Red Skull run around with a bow and arrow?

That was a new weapon he came up with just for that story, Donald! He developed arrow tips that could pierce dang near anything... although we never saw how they would have fared against Cap's shield...

So there was a time when Captain America's identity was secret? I thought everyone knew he was Steve Rogers.