The Double Life of Sandra Knight

I will eventually move on, I'm sure... but now they're just poking the bear.  From Golden Age Phantom Lady #21 (again): 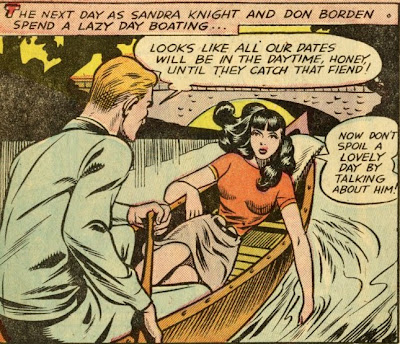 Don, do you just never look at Sandra's face?  Is that the situation? 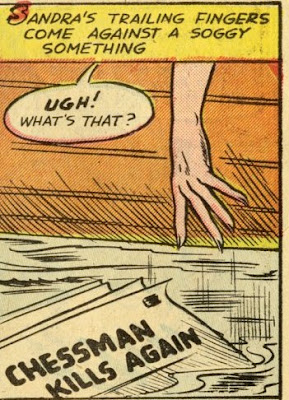 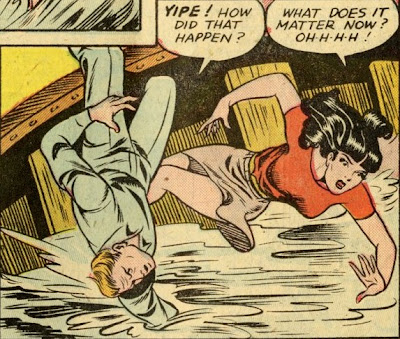 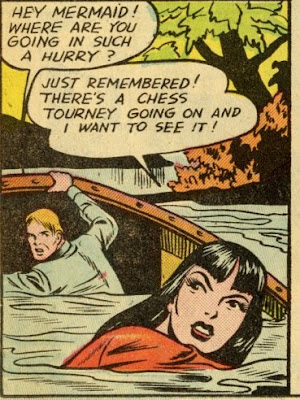 At this point, I would be looking at Beloved rather oddly, but Don just thinks it's hilarious: 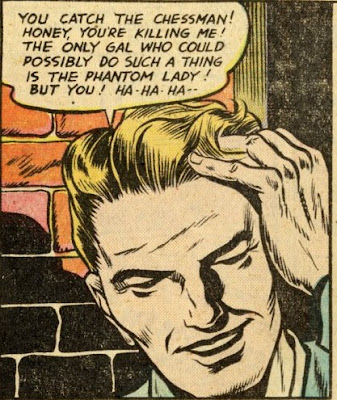 See?  She's practically drawing him a picture.  It's almost a cry for help.  Figure out my secret, Don!  I'm tired of living a lie!

So, as tends to be the case in Don's life, he gets attacked and knocked unconscious by thugs.  And I mean, this happens on a regular basis.  The man probably has brain damage, which might explain why he's unable to solve the great mystery of who the Phantom Lady is. 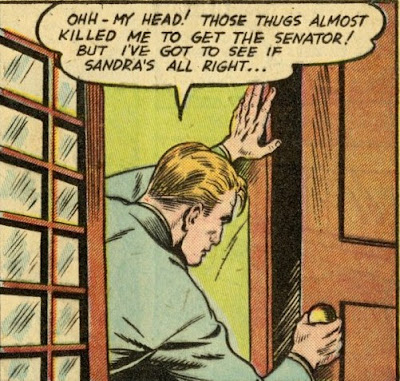 And there's the Phantom Lady, requiring that Don approach her closely enough to untie her: 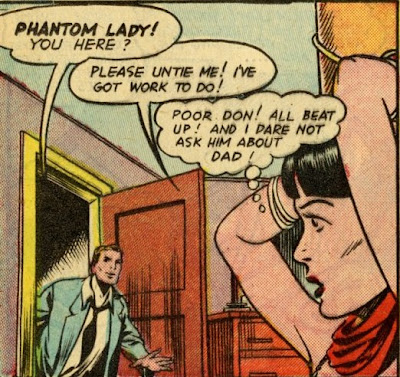 Maybe all those knocks to the head damaged Don's eyesight.  I'm really not sure exactly what it is, but it has to be some sort of legitimate medical condition. 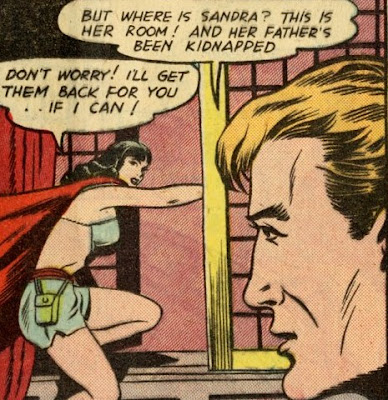 Maybe Don has short-term memory loss and can't remember what Sandra looked like earlier in the day.  I'm serious... Don gets knocked unconscious a lot. 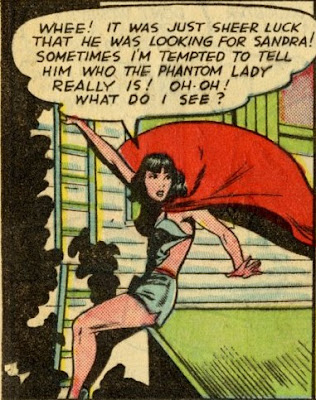 You're testing me, Phantom Lady.

Anyway, off she goes after her father: 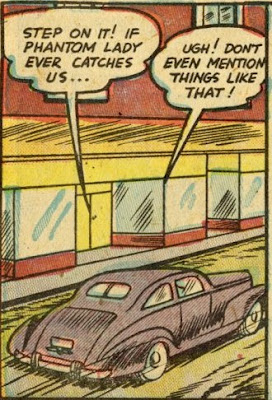 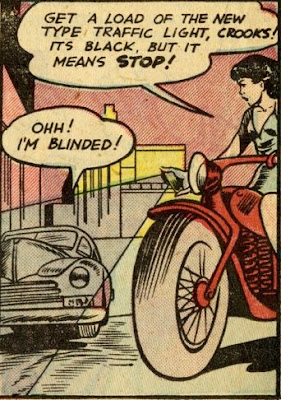 Okay, they're momentarily blinded by her black light, which would explain why someone who isn't around both Sandra Knight and the Phantom Lady on a regular basis might not recognize her.

But just in case we're not thoroughly convinced that Sandra is ridiculously lazy with her secret identity, she decides to shout out her relationship with the kidnap victim. 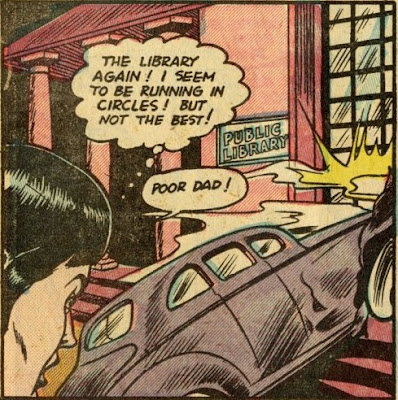 So, now anyone with eyes or ears in their head can now use the scientific method and figure out who's who. 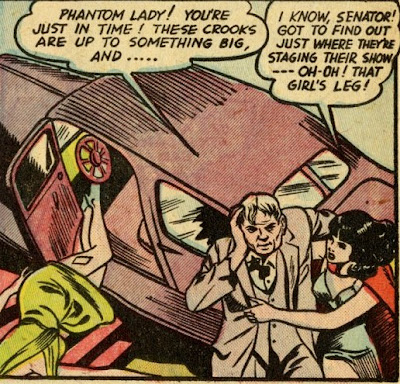 Senator, I realize you aren't wearing glasses, but isn't there something telling you that you're daughter is propping you up right now?  Who elected this guy? 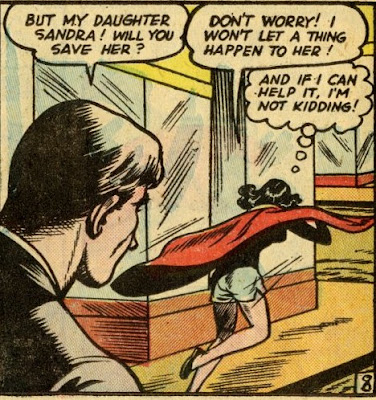 The story ends none-too-soon with my mind reeling at just how amazingly impaired everyone is in Sandra Knight's world: 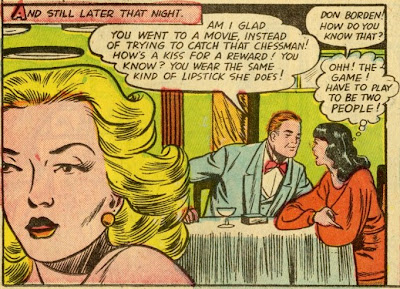 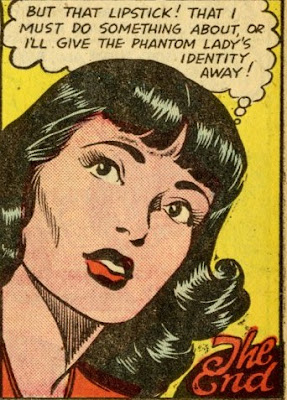 Yeah, that's the biggest flaw in your foolproof secret ID, Sandra.  Your choice of lipstick.

OMG Adam, Phantom Lady -- who can she be? It's like when my wife walks into another room and changes clothes -- she comes back in the kitchen and I say, "Who are you?"

If the creators just IGNORED how silly all this is it would be fine, but people who KNOW Sandra walk into HER room and see HER (but in a different outfit" say, "Phantom Lady! Where is Sandra?"

The ONLY explanation that makes sense is the SNL skit with "The Rock" as Superman/Clark Kent. The premise was that EVERYONE knew Clark is Superman because he did such a terrible job hiding it, including walking around as Clark with his cape hanging out and the costume VERY visible.

It's the only answer: EVERYONE is in on Phantom Lady's secret but doesn't want to hurt her feelings!

This is the skit

Ha! That skit is hilarious! I remember when the Rock sang a song about what life is really like in Hawaii, and I laughed myself silly.

Maybe it's like in cartoons when they have the evil twin who manages to go unnoticed despite wearing a Van Dyke so that the stupider children don't lose the plot? Maybe the creators of Phantom Lady figure their readers are too stupid to remember that Sandra and Phantom Lady are the same person if she's wearing a disguise.