"Deadly" Poison... as Opposed to the Kind that Just Makes Your Drink Taste Lemony

Just bear with me, would you?  It seems to me like there is a lesson to be learned in this sequence from the "Madam Satan" story in Pep Comics #16: 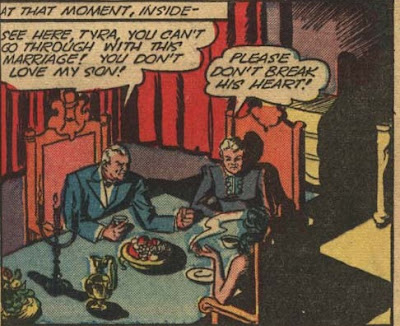 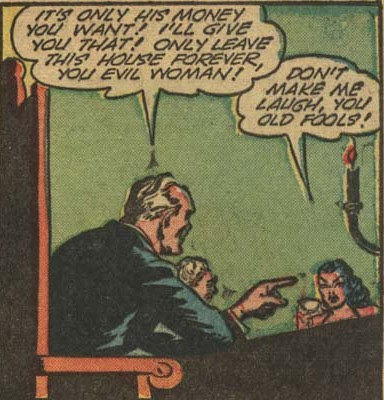 Okay, I'm going to interject here a bit.  Somewhere along the line, saying "I'm just a very honest person" became an excuse for having no tact whatsoever.  This is one of the many things young people don't understand, like what "literally" means, that the letter z is not interchangeable with the letter s and that adverbs need to end in "-ly."

Honesty is fine, but how you package what you say is what separates civilized people from oafs.  That's all there is to it.  So, don't be like these people. 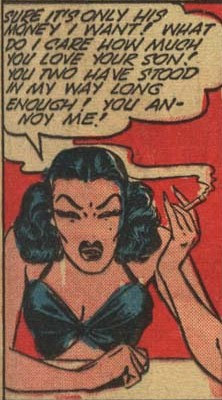 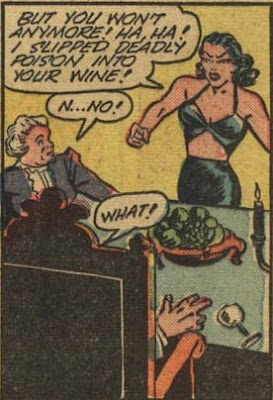 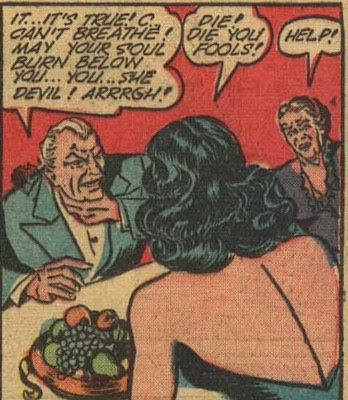 See?  Now, can you imagine how awkward gatherings are going to be in the future between Tyra and her in-laws?  It's okay to pretend to like one another.  That's called courtsey.  A fake smile, forced politeness and feigned affection would have worked wonders.  But now the in-laws are going to croak and Tyra is going to become Satan's minion.

Seriously.  That's what happens.  I guess "Lady Satan" and her assassinations weren't enough for the kids, so we upgraded to "Madam Satan," who will go around literally doing the Devil's work.  Thanks for the dime, kids!

Here's another kid who enjoys his comics:

For a kid who "hit the jackpot," doesn't he look rather vexed to you?  He does to me.

Anyway, here's one of the stories that he got for his one thin dime: 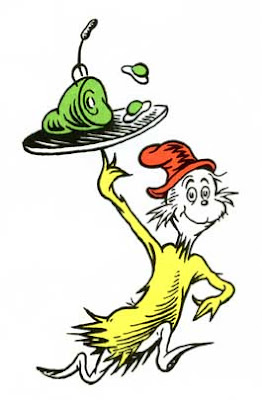 Yeah, I know.  You saw it coming.  But it was a softball, and I never turn down an easy gag.

Let this be a lesson to all the tactless folks out there! really enjoy your blog, keep up the good work.

Well, I certainly had to learn the hard way of the value in choosing words and battles carefully myself :-) Thanks for reading!