Sometimes, I wonder if Batman really earned the title of "World's Greatest Detective" or if that isn't just a bunch of hooey:

I don't know, but once I saw the four birds and the umbrella being used to commit crimes, I think a five year-old would have figured out it was the Penguin. But Bruce doesn't have a clue until he shuffles the words around. It's no wonder that none of Gotham's underworld population stays incarcerated for very long. 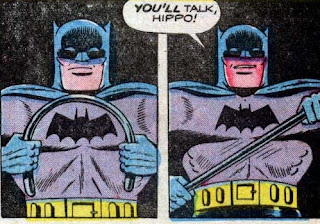 I'm not sure what to take away from this PSA: 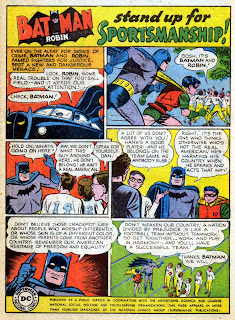 Okay, everyone got that? Seems fine, right? But then, guess what is printed on the very next page: 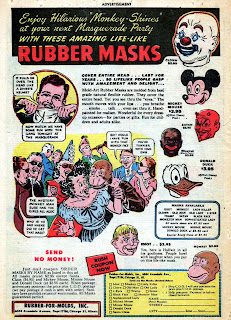 Yes, the notorious "minstrel" mask. Respect African-Americans in athletic competitions, but feel free to put on a minstrel show the rest of the time. There's a lesson to be learned here, but it wasn't exactly the one they were intending.

True story: I was listening to the radio (against my better judgment), and that dreadful "Hot and Cold" song by Katy Perry came on. For some reason, they clearly bleeped out the word "bitch" in the "PMS like a bitch" line. Okay, fine. But what was the next song they played? "Bitch" by Meredith Brooks, which said the exact same word over and over. Inconsistency really grates at me. Like when they give Mischa Barton roles in television and movies where they expect her to act, when she obviously is incapable of doing so.

See you Monday!
Posted by Adam Barnett at 7:50 AM

They do that on the radio stations around here, too. They also play a "censored" version of Pink's "I'm Coming Up" (or whatever the title is) where "ass" is replaced by "-ens", where they take part of the "Mercedes Bens" line and edit it in, but I'm pretty sure there's another song with "ass" in the lyrics that goes unchallenged.

Maybe the CCA programs music for those stations? :)

Actually, if you had asked them back then, they would have told you that the mask advertisement was totally acceptable by the standards of the time. The "minstrel" isn't the worst one, though.

Note that while the "silly black dude" mask is called "Minstrel", the "silly white dude" mask is called "Idiot". So you should probably ask which is worse: basing a mask on a fictional character stereotype commonly used in stage productions(that most people would recognize as a CHARACTER just like the rest of the masks), or basing a mask on a stereotypical portrayal of a real-life mental condition? Oh wait, idiots are still made fun of today despite our "tolerance" and "sensitivity".

Wow, I did not mean for that to turn into a rant. I just know a lot of physically and mentally disabled people and it struck a nerve.

Preach on, Tinkerer..... I will not tolerate the gratuitous use of the word "retarded" because I find it so offensive to the mentally disabled.

Right on, Mad and Adam. I have cerebral palsy and I'm 50. I can remember the word 'cripple' so I am NOT physically challenged. I've tried to get my 17 year old niece to not use the word retarded when referencing songs and the like.

Somehow I get the feeling that batman was simply doing that letter shuffle for robin's and the reader's "benefit". After all, Robin didn't seem to get it until Batman spelled it out for him.
And don't forget, sometimes adults who run TV shows and or do comic books tends to overestimate kids' intelligence... Just take a good look at some of the latest kiddie TV shows, such as the "The Super Hero Squad Show" also known as the "Super Squaddies". Now that is seriously watered down cr@P... All of the recognizable superhero characters act and think like they're.... well, stupider than an mentally challenged person. I'm not kidding at all. and even my six-year-old nephew loathes the show.... and it's actually supposed to be directed at his age group. Apparently he dislikes it because of how it seems to insult the intelligence of his age group.

It's one of those things that you chalk up as an "What the heck were thy thinking?!" Moment.

And don't even get me started on the double standards of the other pages.. that's something I could go on and on about. :P

For some reason I really like the image of Batman pointing out the open window of the Batmobile. I like the thought of them just cruising around with the windows down of an afternoon, looking out for trouble on Gotham's football fields.

Also, does the "4 Eyes" mask actually have four eyes or was it just a pair of glasses? Cause that seems like a rip to me. Still, thank goodness you can smoke through the masks!

In Meredith Brooks' song, she only says the word "bitch" 4 times, she doesn't say it "over and over".

I believe my point was lost on Hornacek. (A) Saying a word 4 times constitutes not only "over and over," but "over and over AND over" whilst (B) why is it okay to say the word multiple times in a song while it wasn't okay to say it once in the previous song?