Before we move forward, let's take one last look at 2009!

Series of the Year: Secret Six 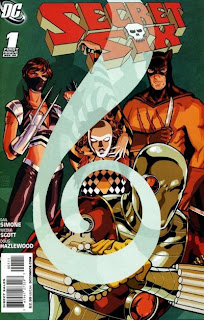 This was a no-brainer, because if Gail Simone writes something I'm going to at least enjoy it. If she writes something and it has the Secret Six in it.... well, let's just say it gives me a reason to live. Deadshot. Rag Doll. Gail Simone plots. Beautiful artwork. It's like Christmas every month.

Mini-Series of the Year: Avengers/Invaders 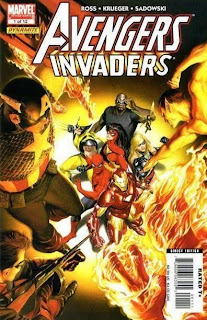 Marvel and Dynamite Entertainment did a great job of recycling the old "team from one time era finds itself in combat with the team from another" plot. This was a story that went at its own pace and resisted pressure to turn every page into a pandering slugfest. Some day, I may get my Invaders monthly again.

Television Series of the Year: The Big Bang Theory 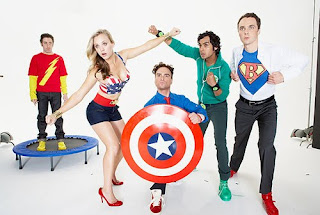 I know this is the third season, but I just recently hopped on board the bandwagon. When I watched the pilot, I dismissed the show thinking it was going to be the typical "nerd spends years trying to woo the affection of attractive woman" shtick. But, to my delight, that running plot was placed on the back burner and the focus has been on dysfunctional friendship of the four misfits. And any show where intelligent people visit comic book stores on a regular basis and make comic book references without shame gets a big thumbs up from me. The audience for this show is consistently growing, and it's well-deserved. 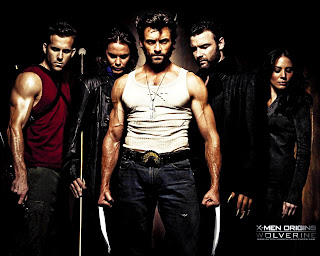 I know, but it's not like I had a lot to choose from. You would prefer The Spirit or Watchmen? I didn't think so. Besides, if you could forget everything you knew about these characters from the comics, this was actually a fun ride. But because it wins more by default, I wonder if last year's Incredible Hulk would have done better if Marvel had waited until 2009 to release it.

If I'm allowed to have a favorite that has nothing to do with comics, I'm going with Up:

When I heard the premise, I had high hopes. This movie exceeded them in every way. This was a visually beautiful film, of course (can we expect any less from Pixar?), but it was also a very moving story of love and friendship that everyone should see. I didn't get my sequel to The Incredibles, but a class act like Up will certainly keep me placated until next year.

And those are my takes for 2009. Agree? Disagree? Well, that's what the comments section is for!

See you tomorrow! Stay safe!
Posted by Adam Barnett at 9:57 AM

I was pleasantly surprised with Up. I'm getting a little burnt on the 'toons that are being marketed as cutting edge graphics, ie Bee Movie, Wall-e, etc. They're good movies, enjoyed them all. But Up was better because of the storyline. Plus, I was totally expecting the balloons and house floating away to be the at the end, where it floats away into the sunset blah blah blah.
No comment on Avatar, I'm so burnt out on the media push and all the tie-ins (hello McD's). I just want it to go away.

I have to disagree about "Avengers/Invaders." I thought the idea was okay, but the whole series went on about four or five issues too long. Every time I picked up another issue, when I got to the end, it was like, "Oh god; it's not finished yet?"

Up was suprising wonderful - agreed. I just saw it last week because I had put off watching "just another animated film". It surprisingly exceeded my low expectations! Love BBT

I SO agree about Gail Simone! Every book she writes is a thrill to read on so many levels!

The lines she comes up with for Rag Doll alone are funnier than most of the sitcoms running these days.

THE BIG BANG THEORY being the exception to that rule. Love that show!

Dave - I would put in a caveat that I tend to read things in large chunks. I read Avengers/Invaders over the course of two days, so I didn't get the same "I have to wait another month for this thing to end?" experience. Had I been reading the individual chapters on a monthly basis, I might have had a different experience.

Well, there you go. It's probably not dissimilar to my saving up all my issues of "Starman" until the series was over, and then reading them all in the span of about a week.