Love! Love and Guilt are the Answer! Tuesday!

I know I'm posting late today. My sincere apologies, but the day really got away from me. Everything hits the fan at once.

First, allow me to share with you a Sub Mariner fish-related expletive that I missed from that one story in All Winners #11: 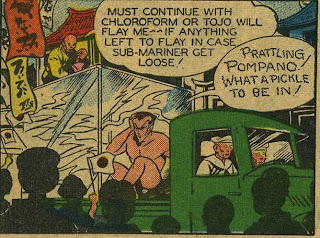 I know. There were just so many.

Check out the expression on Toro's face here: 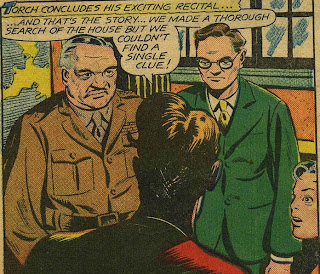 This is the expression of that friend everyone has who can't keep a secret. Why, that's not what happened at all, Torch! We spent all day yesterday at an opium den! What are you talking about?

One of the weirdest stories I've ever seen: 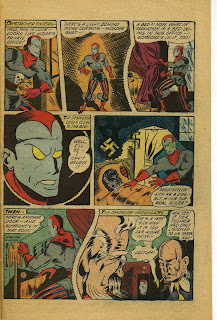 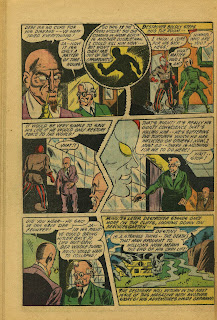 It's very weird that one would write historical fiction at the time the events are happening. So, Hitler was really on his deathbed because he felt sooooo guilty. This offends me on so many levels I really don't know where to begin, but it's just so darn odd (bordering on unsettling), I had to share it with you.

Remember Encyclopedia Brown? He was a boy genius who solved crimes like theft from fruit stands, and they always told you the clues that he used at the back of the book. I never caught the clues he used. Not even once. I did a lot of book flipping when Encyclopedia Brown was on the case.

But this guy, never one to give away trade secrets, apparently talks upside-down. 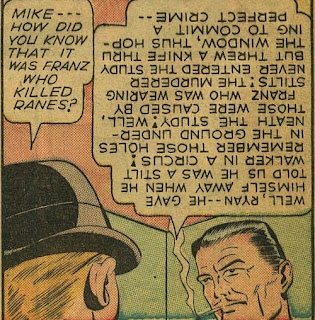 Sorry again for the delay. See you tomorrow!
Posted by Adam Barnett at 2:36 PM

Is he supposed to be talking upside down, or is it just a hilarious type-setting error?

"After his acquital, Franz went on to an only moderately successful career as a Daredevil villain."

Well, historically Hitler was actually a very sickly man. He was even rumored to have dementia at one point. but of course there's no evidence of that though. But there's certainly evidence that he was an hardcore insomniac... He actually only had 2 to three hours' sleep a day. Which was probably a part of why he often had health problems, as seeing he didn't get enough sleep to remain healthy. He also constantly ate sweets in order to stay wake longer.
I suppose to some people back then, this could had been misconstrued as him feeling guilty.

"To save his life, he would have ot restore peace."
To quote the Producers,
Hitler wanted peace. A little piece of Poland, a litle piece of France.

^A little piece of someone's underpants?