I'm Not Leaving Until I Find Lorenzo Bagg Monday!

Howdy! I hope everyone is rested up, because there's plenty of goodness from Batman #58 and 59!

But first, can someone tell me where in the Blue Heck I'm supposed to find Lorenzo Bagg?? 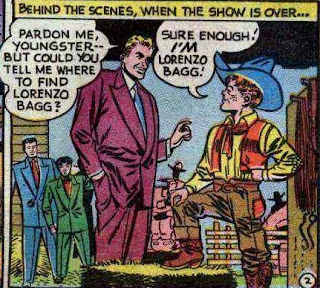 Oh. All right, then. I suppose that settles that. Moving on.

Ladies and gents, I give you the first appearance of Deadshot: 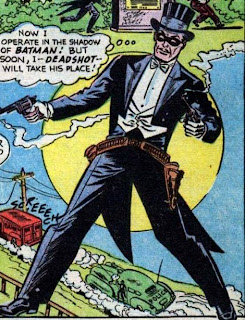 As any Secret Six reader will tell you, Deadshot is seriously awesome. But he actually sat dormant for a good thirty years or so, a forgotten one-shot bad guy (putting him in league with The Gong), until he was given a revival and a bitchin' costume upgrade:

This does not vindicate the Golden Age Sandman's purple and yellow tights debacle in any way, shape or form. I think I'm just saying the hood does a nice job of covering up that little mustache. I loves me some Deadshot.

Batman wears two uniforms? Seriously? All the time? That sounds terribly restrictive to me.

In the future, they can go one step beyond DNA:

To be fair, I imagine that if we explained DNA evidence to people of that time, it would be considered totally outlandish. Although why the "pore pattern" sounded like a good idea, I don't know.

Ahhhhh... to be back at my post and snarky. It's like a hug from a bunny. It really is.

See you tomorrow!
Posted by Adam Barnett at 3:31 PM

I just LOVE your blog!!!

Is Batman breaking the 4th wall by referring to The Joker as a "character"?

Why are convenient props so often explained with a "good thing I always carry..." speech? I mean, wouldn't Robin already know that Batman wears two uniforms? They sleep in the same freaking bed, for crying out loud.

How about: "Good thing the writer forgot to prepare for this scene until now, necessitating awkward back story conversation!"

@Allergy
I thought so too, at first, but maybe Batman is just using character facetiously. As in "Oh that Joker! What a character! He blew up the hospital... Again!"

Batman must sweat a lot under both of those costumes. Or did part of his martial arts training include the ability to withstand heat and constricting clothing?

I never saw the episode in question, but a friend of mine in college told me that the Adam West Batman once wore Bat Thermal Underwear while fighting Mr. Freeze.