Best Lick on a Stick Monday!

It was weird movie weekend at the Barnett house. We watched Lymelife, which was okay but didn't make any sense unless you watched the alternate ending. Then we watched Gigantic, which made no sense at all. If you simply must watch Gigantic, and I certainly don't recommend that you do, please explain to me how that movie got made in the first place.

If you want to find true love, look no further than World's Finest #119: 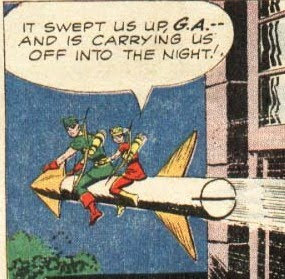 Try and spot the metaphor if you can. The scary thing is, Oliver and Roy getting scooped up by a giant arrow and getting "carried off into the night" was a literal element of the story, but I'm frankly a little disturbed by the imagery here.

You know what else disturbs me? That they don't make this any more: 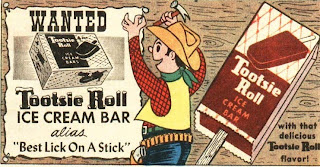 Not only does that sound like an awesome treat, but the line "Best Lick on a Stick" is the greatest slogan in 20th Century advertising.

Here's some Fun with Out of Context Dialogue!(tm!):

This, kids, is why I keep telling you to pay attention to what you are saying. Granted, when you consider Roy's subsequent heroin problem, perhaps "Speedy has never spoken a true word," but I think they were trying to say "Speedy has never spoken a truER word." It's like that girl on the Amazing Race last night who told her partner, "I'm good at either challenge" when she should have said "I am equally good at either challenge," which would be more accurate because she was quite terrible at both.

In any respect, the dialogue box tells us that Roy either understates the situation or is a flat-out liar. Either way, double-check everything he tells you.

See you tomorrow!
Posted by Adam Barnett at 11:23 AM

Gosh...the most unnusual things seemed to happen to Ollie and Roy.

Looks like ol' Tex there is puttin' up a wanted poster for the Hangin' Fudge Judge. But then, who wouldn't want TOOTSIE ROLL ICE CREAM?

When you mentioned Gigantic, I thought you were referring to the They Might Be Giants documentary. Thankfully you weren't. If you like the band, you'll love the documentary. Lots of good clean, wholesome fun.

Ollie: Thanks for the running commentary, Roy. Good thing I have you here to explain what I'm currently experiencing.

Also, De beat me to the punch. Highly recommended documentary.