Sometimes, it's the easiest things that give you the most trouble. For example, the invulnerability of Superman made for an easy escape out of whatever trouble a writer might have written him into, but it's hard after a while to come up with things that would pose a threat to an invulnerable person. That's why they came up with kryptonite. True story.

Time travel is another big problem that causes more problems than it solves. For example, it gives the writer room to come up with ideas beyond the confines of Gotham or Metropolis, but one must then deal with the infinite possibilities it creates. 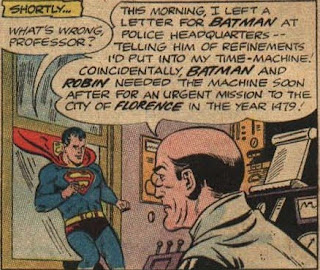 It always amazed me when Batman needed to time travel for an urgent mission. And it wasn't just to keep DC Comics from allowing Jack Nicholson to play the Joker back in the 1980's.... oh no, it was always for something very far removed, like 15th Century Italy. As of this writing, I haven't finished reading this story, but I can't wait to see how they justified this. 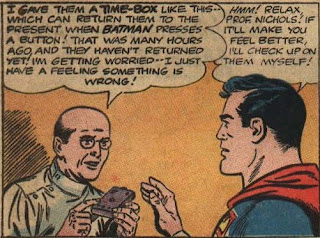 At this point, you can see the problem. If you send someone to another time with a button that will yank them back to the present when they're ready to come home, they will either immediately re-appear or they are lost forever, presumably dead. Yes, probably dead. But at the very least, they are lost forever or they would have been back already. You didn't send them to another planet, you sent them to another time, and since time is relative, their absence is conclusive evidence that you sent them to their deaths. Nice work, Professor.

But Superman, contrary to what others might have us believe, is an idiot, and he goes right along with the idea: 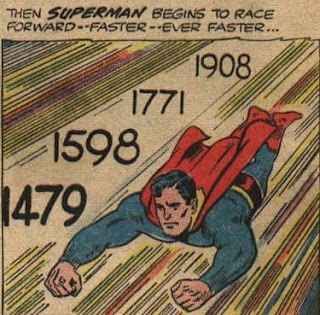 Now, I'm not sure how he navigates time without a machine to give him an idea of where he is. I'm pretty sure that God didn't obligingly put decade markers in the timestream, so I'm not convinced he's even traveling in the right direction. 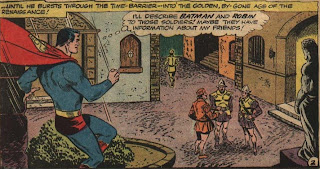 Now again, considering how user-friendly the timestream was, I think Superman could have easily just deposited himself at the moment in time when Batman and Robin appeared. His presence could have saved them a lot of potential difficulties, not to mention their lives, because as we have already conclusively established, they are dead and lost forever.

Actually, for a long time there was a time travel "rule" in the DCU that time travelers had to return to their own time the number of hours/days that corresponded to the amount of time they were time traveling.

So, for example, if Batman was 1547 Italy for a week he couldn't return to modern day Gotham for a week.

The basis of the "rule" was something that started during the Superboy/Legion of Superheroes era. The idea was that, if Superboy spent days or weeks in the 30th century and then returned to the exact second he left the present, he'd appear to age prematurely. Therefore, the editors of the Superman titles (and, presumably, the interconnected Batman stories) established the aforementioned rule.

How "urgent" can something that happened hundreds of years ago really be?

Batman will go to any lengths to plant evidence.

I'm sure I've read somewhere that Superman can speak "all Earthly languages" and some alien ones. Apparently the "all" included time as well as geography.

This time travel rule, I suspect, was the reason the Legionnaires that Supergirl first met were the children of the Legion that SuperBOY first met -- a wrinkle they quickly smoothed over.

On the other hand, the story in which Superboy time-traveled to the past to save the live of President Lincoln, only to be thwarted by an ADULT Lex Luthor, seems to violate the rule. But the story was so darn good that I don't care.

Maybe Batman & Robin are in 15th Century Italy to teach them to wear pants.

I heard the rumor that in a episode that super man had to Buy Viagra... in my opinion it is so cool!