I know I've picked on the Sub-Mariner in the past, so let's hear some of the great exclamations from the Human Torch and Toro from All-Winners #7:

I don't know why a flaming person would be calling upon hydrants. I would think that a hydrant would be the last thing I would want to see if I were made of fire. Then again, I've never been made of fire, so I really wouldn't know firsthand.

And this isn't a battle cry, but one of the most peculiar things I've ever heard anyone say: 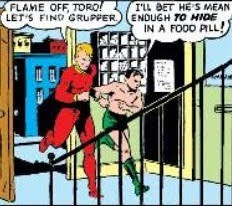 is there some sort of slang from the 1940's about someone being so mean he would hide in a pill? The term "food pill" comes from the story itself, but I don't know why hiding in one would be a sign of particular maliciousness. I don't understand most of what my grandfather e-mails me, either.

And, just so he isn't feeling left out, here are a few choice words from the Sub-Mariner: 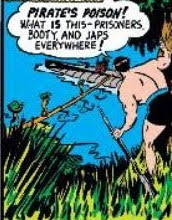 I don't want to be accused of splitting hairs (I leave that for Star Trek fans), but while a pirate has something to do with the ocean, a grasshopper certainly does not. Has Namor run out of fish?

I don't think it's splitting hairs to point this out, however: 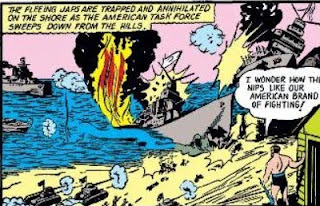 The Sub-Mariner, whose patriotism I certainly don't question, is not an American. I wouldn't even bring that up, but they made a big issue of it in the past as to why he couldn't join the U.S. Navy. Namor apparently still feels like he's part of the team even though he has been specifically excluded in the past.

Frankly, I think that's big of him. I notice Namor didn't become a real tool until he met Sue Storm. I'm just saying.

See you tomorrow!
Posted by Adam Barnett at 4:27 PM

The fact that Namor, a MUTANT CROSS BREED has the audacity to use the N-word when describing those of the Asian persuasion makes me chortle!
Pot, kettle, black anyone?

I don't know if it makes any more sense, but "mean" used to mean "stingy" (and still does in England, I think).