Because Being Different Always Makes You Popular Friday!

I'm watching Superman/Batman: Public Enemies, and while it isn't bad, I enjoyed reading the graphic novel a lot more. Is DC missing a bet by just doing animated versions of previous (albeit very good) storylines? For me, I think so, but I suppose time will tell.

Here's where DC definitely missed a bet, circa 1960: 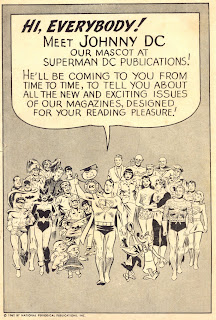 Oh, Johnny DC. Never did a company spend so little time putting together a mascot than they did with Johnny DC. As you might imagine of a stick figure with a face like a Lemonhead candy, there wasn't a whole lot of personality to Johnny DC, which is the opposite of what you're going for when you are promoting comics. Whenever you have to have popular characters perch a new character on their shoulders, you know there isn't a lot of confidence here. Welcome to the Character Hall of Shame, Johnny DC!

You know who we haven't seen in a while? The Fudge Judge!: 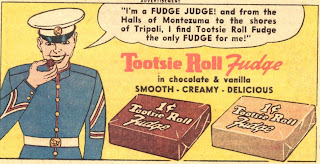 That's a little Veteran's Day Fudge Judgin' action for you there. When you pray for the troops, remember to include the service animals (like dogs) that are also out there in harm's way.

You know who else is in harm's way? This kid: 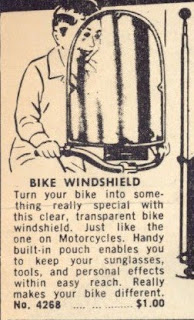 I don't care if motorcycle cops had windshields like that or not, you were begging to be the neighborhood pariah if you had that sort of thing on your bike. Rather than "windshield," perhaps we should call it what it really is: "Something to aim for when you are hocking loogies at the kid with overprotective parents." You're just asking for the other kids to see how much protection the thing really provides. It will only end in tears.

See you tomorrow!
Posted by Adam Barnett at 1:17 PM

I like how they identify the windshield as being both "clear" AND "transparent".

I remember the full page Johnny DC ad. That's actually a pretty nice piece of comic art. Kind of looks like Mike Secowski. I think Green Lantern and Wonder Woman had to got a room a few moments after this was drawn. Thanks for the post. I really enjoy your website and your sense of humor.

And you know, at the grand price of $1.00, that's a quality windshield you'll be getting.

Reminds me of a 7' ghost I once purchased from one of those ads - a flimsy white plastic sheet that you placed over a balloon. Oh! the disappointment.

Johnny DC is back in action, hosting the few kids comics DC forces itself to publish. He even used to be on the cover of the "Johnny DC line" comics, so parents would know that Supergirl: Cosmic Adventures wouldn't have all the "adult" themes (mostly violence) of the regular Supergirl comic. They don't do that anymore, but Johnny still hosts the comics.

"Something to aim for when you are hocking loogies"

I was thinking more of rocks and dirt clods than loogies. But then I never was a strong hocker.