What's even lamer than Superman? His supporting cast, of course!

Check out Jimmy Olsen. He had his own inexplicably successful title back in the day. Here's Pimp Olsen from Jimmy Olsen #76: 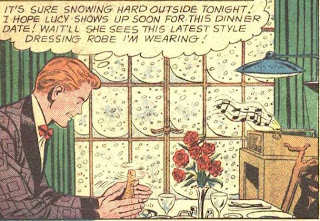 Sometimes, the boredom factor was so painfully obvious that the writers would slap a ridiculous suit on him and give him the powers of Elastic Lad. Note how the full name "Elastic Lad" was written on the front and back of the costume. That way, when a bad guy was smacking the life out of him, he would correctly remember to say "Take that, Elastic Lad!" instead of "Take that, Jimmy Olsen!" 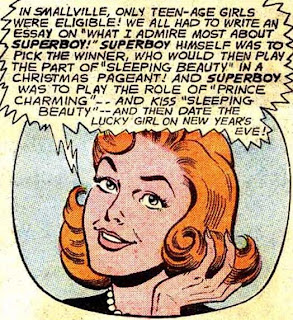 Wow, Lois, I don't know what you have in mind, but I feel like someone should be calling the cops. I'm also a little concerned that Mr. Harmless Scientist has all that stuff handy. When she asks for duct tape, a chainsaw and some bleach, I'm outta here... 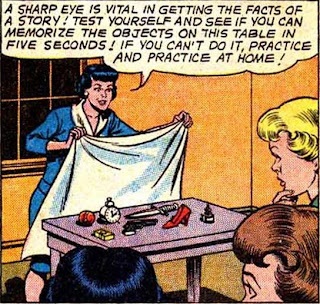 Cripes, Lois, now what's with the dagger and semi-automatic handgun? And how am I supposed to practice this at home? I didn't know that offensive weapons commonly used in murder/suicide pacts were required materials for this course!

This is really one scary chick. Nothing personal, Lois, but I'm not turning my back on you. Ever.
Posted by Adam Barnett at 2:09 PM

I'm afraid of what Lois might do if one of those girls doesn't memorize everything... I mean there's a knife right in front of her...

I want my own time-travel kit!

For God's sake, Jimmy, just capture the guy. Don't toy with him.

I feel so awful stuck here in last season's style dressing gown. No wonder the girls won't talk to me.

And what the hell kind of "story" are they learning how to write? How often do Metropolis readers open up the Daily Planet and find a story that says "Red High Heel Shoe, Clock, Ink Bottle On Table"? Those poor suckers. I'd say a bigger story is the parties their reporters are throwing with all of that sleeping powder and nitrous...

Lana and Lois definetly had their stalkerish side. If I were Superman I would have taken out a restraining order on them YEARS ago.

Only Smallville GIRLS were eligible to kiss Superboy! that's why Pete Ross went on those camping trips alone with Clark.

Re: Jimmy and the snow: How about, "It's snowing heavily, I hope Lucy makes it here ok during the bad storm!"

Jimmy Olsen had a fan club in the comics. Really. Kids who would dress like him with boyties and all. Worst... role... model... ever.

If you read Lana's comments really carelessly it sounds like the winner gets to sleep with Superboy.

Why doesn't Lois just flat out ask for the roofies?