The Ends Justifies the Means Thursday!

For no good reason at all, let's look at All-Star Comics #7: 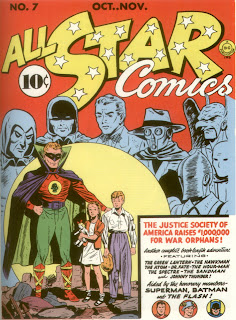 When I first saw the blurb about raising one million clams for war orphans, I thought this was an actual goal and was about to get all "What has the Punisher done for war orphans lately?" on you. But, nope. It was just a plot device.

And I suppose someone's heart was in the right place. It was still nice to see the heroes actually give a rip (although it was a fictional rip) about the innocent victims of a war between governments. So, off the JSA goes on a self-imposed challenge to raise $100,000 each for the cause.

It was how they went about it that I found disturbing: 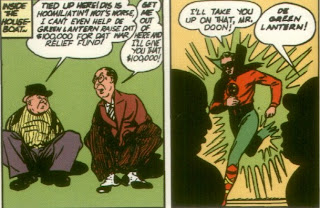 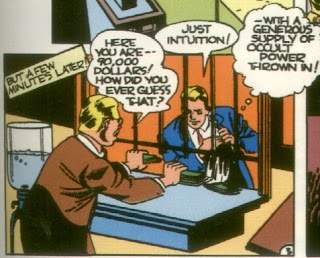 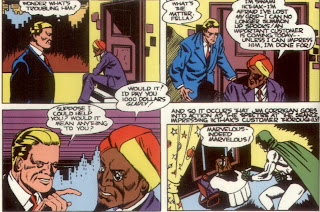 
And right when I'm about to toss out hope for any heroics, I get a little refreshing honesty (not to mention good old-fashioned violence) from the Atom: 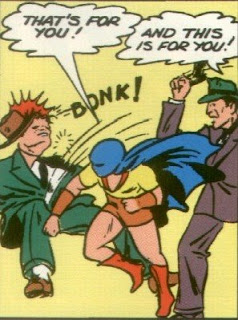 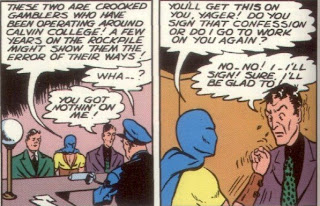 Yeah, that'll hold up in court!

Mr. Atom, when did you witness the Defendant sign the confession?

Why, after I threatened him with bodily harm if he refused to do so! 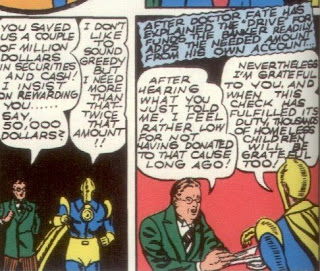 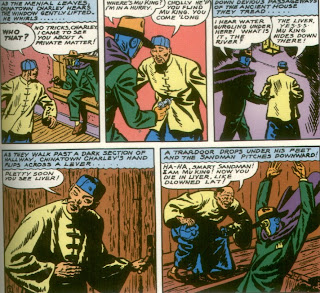 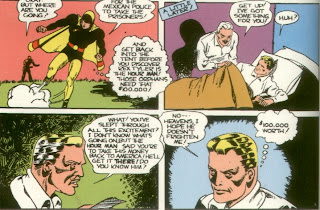 
So, did they raise the million? You betcha! In 100% imaginary money, which I'm sure helped out many imaginary war orphans. The real war orphans, however, did not benefit from this one whit. But they weren't Americans, so I'm pretty sure we weren't supposed to care that much to begin with.
Posted by Adam Barnett at 11:27 AM

Come on,the U.S. did do something for European orphans/refugees.(Perhaps the Atom terrorized Congressmen into voting for the Marshall Plan).

I'm pretty sure they got the whole "Chinese people mix up their L's and R's" thing backwards. I believe the correct gross Asian stereotype is saying R's in place of L's, not the other way around. Isn't it?

I think anonymous has a point!!

Japanese often pronounce R's as L's...this isn't a stereotype, but an observation. Where I work, our resident Japanese engineer often speaks of "Leplication" instead of "Replication." It has to do with early learning of - is it "phonemes" - that sets up neuromuscular pathways that leave the tongue preferentially able to pronounce words this way or that. I'm sure a native English speaker who tries to learn Chinese or Japanese beyond the age of, say, four mangles those languages indescribably worse.

I do not want to die in liver. That sounds really gross.

Rex "Hourman" Tyler looks like he should lay off the Miraclo for a while.

Since when do checks (or cheques, wherever you're from) fulfill duties? What's all that about?

The Atom could probably get away with his strong-arms tactics in Virginia too. Thanks rocket docket!

You have to admit that the Boys certainly do their fund-raising with...gusto!

I would buy the HELL out of a Dog the Bounty Hunter comic book.