The Atom vs. Higher Education Wednesday! 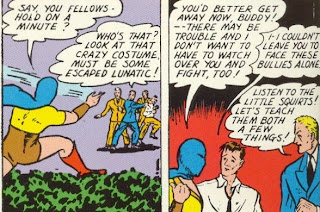 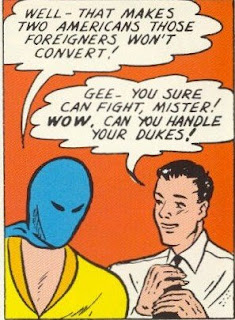 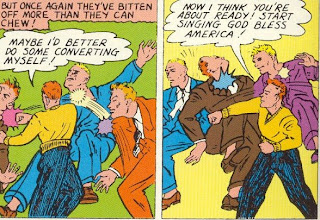 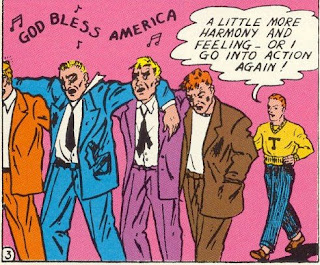 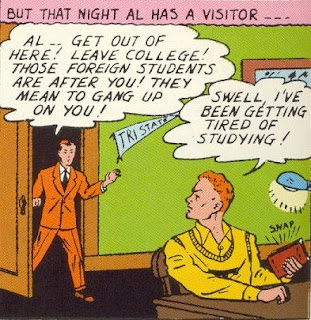 This is what always kind of bugged me about those old-school JSA stories: 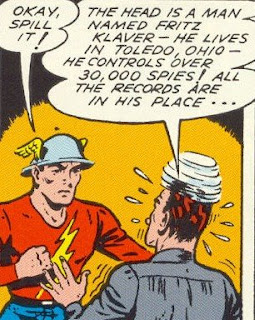 Okay, everyone got it? Why doesn't the Flash pick up a phone or something and let everyone know where the clues led? 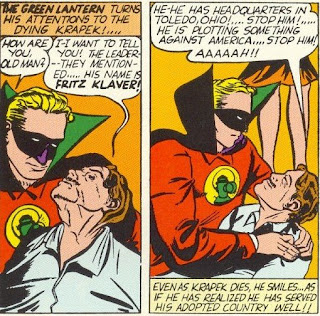 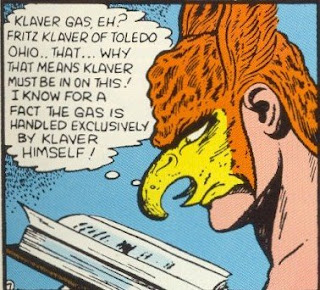 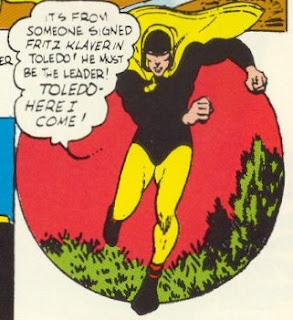 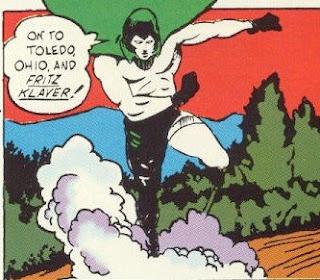 Dr. Fate, it turns out, is the only team player who tries to save anyone else unnecessary grief: 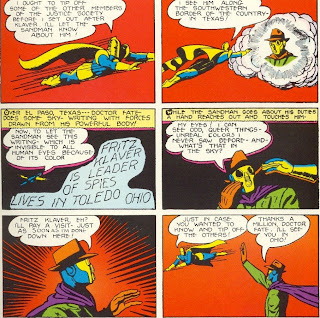 It seemed like every JSA story went that way. Everyone would scatter in a thousand different directions and follow clues to the same place. It was like a violent literary version of Chutes and Ladders. I can understand these guys being that dense, but you'd think that Starman or Dr. Mid-Nite would point out the inefficiency of the system when they joined up.
Posted by Adam Barnett at 12:07 PM

So is that what American students did back then? Just beat the crap out of foreigners?
Sounds a little bit too racist for my liking! Glad i didn't sign up to an American uni!

"Look at that Crazy Costume. Must be some escaped lunatic!"

He's saying what I'm thinking. Why isn't there more of this sort of expository dialog in comics?

So um... couldn't Dr. Fate just TOLD Sandman? I mean they were talking after he went through those elabarate smoke and color powers... he could have said it and save the time..>!!!

Were these nefarious foreigners communists or Nazis? And did this issue come out before Pearl Harbor?

Take heart guys. Beginning in the late 60s anti-american forces took over college campuses and remain in charge to this day. Only now we call them professors.

I simply couldn’t go away your website before suggesting that I actually enjoyed the standard information an individual provide on your visitors? Is gonna be back frequently in order to inspect new posts. casino med bankid

I would never want to miss out any opportunity to read out your contents. kissmanga - read manga online

Excellent Blog! I would like to thank for the efforts you have made in writing this post. I am hoping the same best work from you in the future as well. I wanted to thank you for this websites! Thanks for sharing. Great websites! netlify

Nice to be visiting your blog again, it has been months for me. Well this article that i’ve been waited for so long. I need this article to complete my assignment in the college, and it has same topic with your article. Thanks, great share. https://eleganteduc.netlify.com

Wow, cool post. I’d like to write like this too – taking time and real hard work to make a great article… but I put things off too much and never seem to get started. Thanks though. netlify