When I'm putting together this blog, I generally don't read ahead. For example, I have no idea what we're going to cover next, when Detective Comics quits giving me material. In fact, I don't even read an issue ahead. When I'm ready to write, I start reading and I make the panels as I go.

I say this as way of background because, as I plodded through the later 200's of Detective, I noticed only one actual villain developed who still hangs around today, and that's pretty sad. And that villain was Clayface, who I think only got press time because he was one of the weirder villains in the gallery.

But as I inched towards #300, I grew cautiously optimistic. 300 issues is quite a marker in any day and age, so surely they would celebrate it with a big event. A classic Joker story? The return of the Riddler or the Scarecrow? Heck, at this point I'd take the Gong!

Well, enough suspense. Here's what we got: 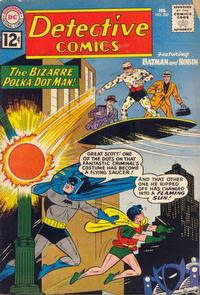 Welcome to the Silver Age, my friends!

It get's worse. "The Polka Dot Man" was bad enough, but here's what they actually called him: 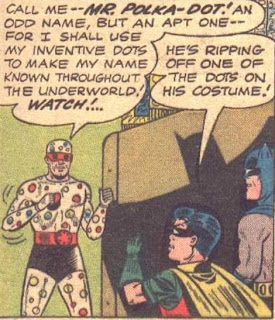 I guess someone at DC put down the pipe long enough to realize that promising readers a battle with "Mr. Polka Dot" on the cover certainly wouldn't help sales.

Anyway, what do these dots do? You know the answer: In true Silver Age tradition, they do freakin' anything! Why, because it's the Silver Age and screw you, that's why! 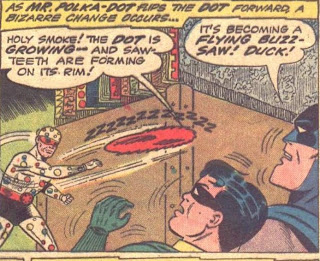 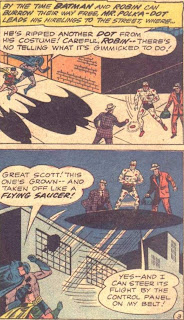 Now, keep in mind that Batman has batarangs and a whirly-bat by this point that he could use for a ranged attack or to follow these guys. But for some reason, he momentarily forgets that and just gives up: 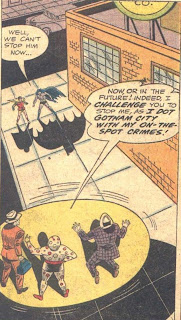 It's so zany! His crimes are so wild! It's the Silver Age! Comics only cost twelve cents!

There even a dot that turns into a heat-seeking fist!

Where did the technology come from? It's never explained! No one knows! And you'll accept that answer because it's the Silver Age! And screw you! You only paid twelve cents! 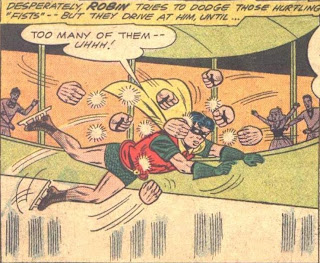 And we'll finish the bad guy in a way that conveniently lends itself to puns!

Is it over? Tell me it's over!

Whew. I know. But I just can't stop. The worse the comic is, the more it has me in its grasp. It's too late for me, but tell others what you have seen here!

Not that I've ever indulged in it, but Google "microdot acid" and you'll know the real reason why Batman couldn't use his batarangs against "Mr. Polka Dot." Try thinking of it like Scarecrow's fear gas, but from a Timothy Leary-standpoint.

NB that the circles on Mr Polka-Dot's outfit are of different colours and not of a uniform size. Are they true "polka dots" at all?

"Now, keep in mind that Batman has batarangs and a whirly-bat by this point that he could use for a ranged attack or to follow these guys. But for some reason, he momentarily forgets that and just gives up."

Batman is smarter than you think, even in stories like this.
1) By the time the Dynamic Duo ran back to the Batmobile, hauled the Whirly-Bats out of the trunk, assembled them, and took off, Mr.Polka Dot would've been long gone.
At least, by keeping an eye on them, he'd get an idea of which direction their hideout was!
2) At that distance, winds would be a factor in any Batarang hurling. And Batman would'nt want to injure innocent bystanders!

As to Polka dots having to be uniform in size or color...
"Polka dot is a pattern consisting of a series of dots that are not necessarily equally spaced and sized, often differently coloured."
So, yeah, they're polka dots.
Of course, anyone who ever read an issue of Little Dot could've told you that...

MAYBE they were thinkin that for issue 300 instead of bringing back one of the old lame villains that Batman has fought like a bagillion times we will make the next new ultravillian that will be his most bad ass villain ever for now and all time. The name Mr. Polka dot will resonate from this day forth!

I'm sure this comic was about as interesting as staring directly at the sun for 30 seconds and then seeing spots for the next 20 minutes. Either way, you have nobody to blame but yourself.

Silver age is just great for making you laugh...and smile..

Hic-ups or what is (NOT) better known as the invisible polka dot!

Ya know, considering the fare his Distinguished Competition was putting out, it's no wonder Stan Lee could boast of being nigh to Shakespeare in comparison. Heck, even the Spidey Super Stories of the '70s seem more sophisticated than these Batty Batman Bonanzas! Now what would Frank Miller's version of the goddamned Batman have done with Mr. Polka Dot? Shudders to think ....

My daughter has a stuffed animal inspired by the Put Me In The Zoo book by Robert Lopshire. The book tells of a dog/leopard that can cause his spots to do anything -- change color, change size, spin around, adhere to people, etc. (although not turn into buzz saws or fists). Now I know where the Polka Dot Man gets his inspiration.