One interesting thing I've noticed while going through these issues of Detective Comics around issue #300 is the staggering number of Clayface appearances. The Joker, the Penguin, Two-Face, the Riddler, the Scarecrow and Catwoman are nowhere to be found (although we did get the first appearance of Cat-Man). But Clayface has appeared three times so far in their absence. I guess all the shape-changing lent him to enough weirdness that it was worth bringing him back.

But Detective #313 gets us back to some good old-fashioned detective work. Like this:

As is mandated by human biology, whenever someone has a net or a lariat thrown over them, a crook will drop his gun. It is some sort of involuntary muscle spasm that cannot be controlled. Batman employed this little-known medical fact often to his advantage. Stay in school, kids!

You know what we haven't seen in a while? 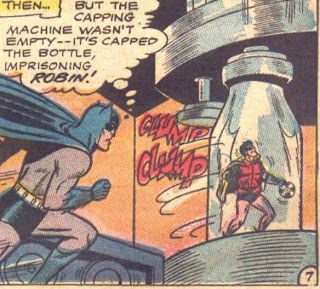 This one takes a little background. See Batman, talking and all that? 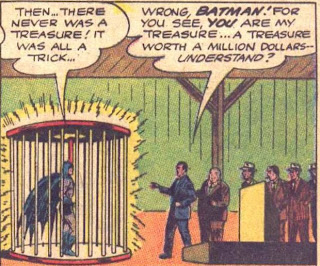 Well, here a smarter-than-average-comic-book-bad-guy doesn't waste any time and tries to kill him right away:

That's a pretty good strategy, and would work any other time except in the Silver Age. Why didn't it work this time?

You know the answer! 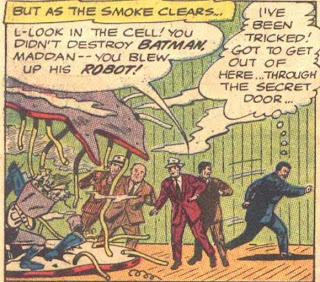 A robot, of course! Because it's the Silver Age, and if I'm selling you a comic for twelve cents, I'm going to give you twelve cents worth of thought in my stories! What are you going to do, demand more value for your dime and two pennies?

See you tomorrow!
Posted by Adam Barnett at 12:30 AM

"You blew up his ROBOT!...which was such an amazingly lifelike piece of technology that many major governments would be willing to cough up close to a million dollars to get a a look at it. If you hadn't just blown it up!"

In that next to last panel, the explosion panel, that looks like Kingpin (just to the right of the main bad guy) watchin while chompin on his cigar there.

Robots ALWAYS fall for the "there's a million-dollar treasure inside!" trick. It is their tragic flaw.