They seemed to think they hit a creative vein with robots, so meet the latest robot-in-a-Batman-story from Detective Comics #307: 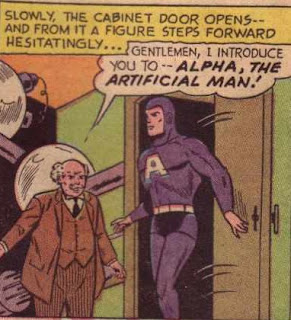 Normally, I'd make some sort of smarmy comment, but words escape me where this panel is concerned: 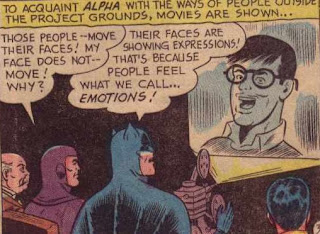 Or to be more specific, with that weird Jerry Lewis-looking thing they're showing Alpha on the screen: 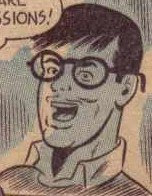 This is a very curious choice when it comes to illustrating emotions. First and foremost, I'm not sure what emotion is being conveyed there, other than "huffing paint causes brain damage," which isn't really an emotion at all, but more of a cautionary tale. But that is seriously disturbing, and certainly not what I would use as a paragon of human facial expression. It's almost like the artist was just yanking us around to see what he could get away with.

Oh, DC Comics! Give me something I can understand... like sexist comments: 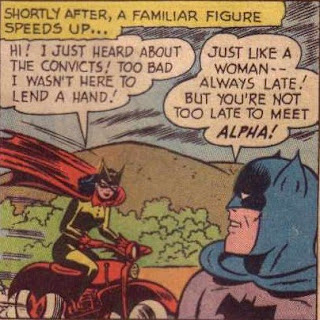 There! That's much better. 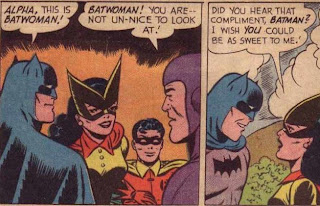 It is also a Law of Nature that said woman will only pay attention to the nicer guy long enough to curry the jealousy of the guy who treats her like crap. Anyone who has already been to junior high will know that this is a Universal Truth.

But take heart, nice guys! Girls pull their heads out of their collective behinds at around age 30. That's why God invented Playstation; so that you could have something to do whilst you wait.

This panel really got to me: 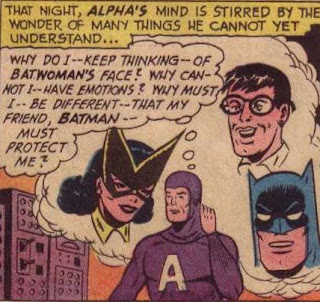 I would totally understand if Alpha was consumed with thoughts of Batwoman, but having Batman in the mix is .... well, let's just say it's interesting. It may be that Alpha is interested in Batwoman and Batman, which is fine with me if that's the groove everyone is on.

But who else is in that little bit of mental erotica?

Jumpin' Jennifer Lopez on a Hippity-Hop, that is the funniest thing I've seen in days!
Posted by Adam Barnett at 12:31 AM

Great one! cheered up my day as always!

Maybe that was supposed to be Jerry Lewis.

Well, somebody grab that one up for an avatar!

ok I don't get it. Any artist under the pressure of a deadline can I believe come a cropper with a panel. After all these guys were being paid not to sit on their hind ends making high art, they had to crank them pages out baby.

So saying that however, the jerry lewis/salvadore dali/rain man thing is repeated meaning the artist in question thought this was a good representation of "emotion?'

I am speechless, good thing I am typing.

That was actually how Jerry Lewis looked in the Nutty professor.
http://graphics8.nytimes.com/images/2004/10/12/movies/12dvd.650.jpg

so that was actually how he looked like when he was expressing his... emotions in the movie.

so you know which movie they were watching. doesn't make the images of the professor in drawn format any less hilarious though. ;)

That is so dang hilarious.

Adam, I wish you had been around to give me advice when I was young and seeking romance.