Beware the Beam Coming Out of My Eye-Stalk Monday!

As we saw the cover to this issue in the last post, I presume everyone is wisely keeping their expectations low. Frankly, I would think that you should know to always have your expectations low if you've visited our little funnybook Mardis Gras more than once, but it never hurts to remind you to keep your hands and feet inside the ride at all times.

Okay, we know that Batman is going to be fighting some monster that an artist probably doodled on the back of a napkin somewhere. So, here it is:

Okay... there's no way the Comics Code is going to be offended by that, so we're off to a very acceptable start.

Hey, you know what would make this even more awesome by six year-old boy standards? Using a time machine!

How do you suppose you get a time machine through customs? I suppose you could try and sneak it into the country, and then go back in time and try again if you failed.

So, we have a generic monster, Random Ray Usage (tm!), and time travel. You know what would make this comic really awesome? 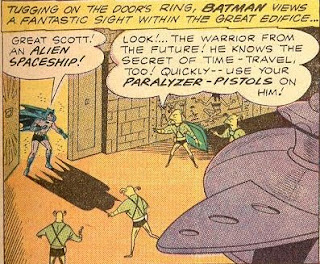 Of course! Aliens! You knew that was coming, didn't you? Those SuperPro posts are starting to look pretty good in hindsight, aren't they?

I started reading comics in 1974, so I was right on the tail end of when comics were starting to become a little less embarrassing, but still hadn't broken the Watchmen and Dark Knight Returns sophistication level. This means it was very challenging for someone to write a PSA like this: 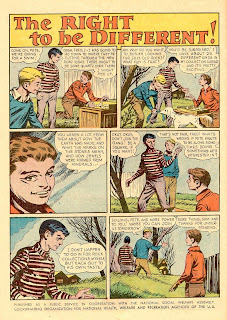 See? They rightfully assumed that if you were a comics reader, the only kid you could possibly make fun of is the kid who collected rocks. And back in the day, they were quite correct. Every comic book reader knew that even the kid who steered every topic of conversation into a discussion about dinosaurs was higher up on the food chain than you.

Oh, comics. I still believe my life with you has been a life well spent.

See you tomorrow!
Posted by Adam Barnett at 12:11 AM

Monsters and time travel and aliens, oh my!
I haven't been 6 for several decades, but that's AWESOME (and will probably end up as the plotline for a multi-million dollar cgi 3-D movie a year from now)!

Of course, Pete never learned to swim but did become a multi-millionaire. Fred is doing hard time and should be out in another 5-7 years.

Nice that they had Sam petting that dog. Fred? Yea, he'll go far wearing the pink and white striped shirt to the swimming hole.