Hey! It's more Cat-Man! I guess someone thought this would be the perfect nemesis for Bats. They were totally wrong, of course, but at least we were back to the villains for an issue, with nary an alien or robot in sight! 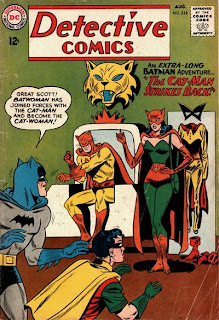 You know what we haven't seen in I-don't-know-how-long? A Random Slap! (tm!)

Yes, in this issue you not only got the return of Cat-Man in his not-totally-ineffectual-but-not-the-badass-he-is-today early days, but you get a Random Slap! (tm!) Some days, it all falls into place.

And don't you love the reporter's moral qualms? I sure hate running this story that will sell a billion copies, get picked up by the AP and insure a respected place in my chosen profession for the rest of my life. But, doggone it all, the public has a right to know!

Boy, does this take me back to my single days: 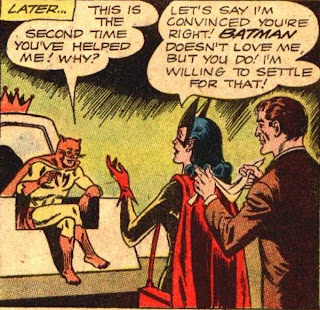 Thank goodness for women who settle. If it weren't for women just giving up on their true loves, I never would have found a wife. 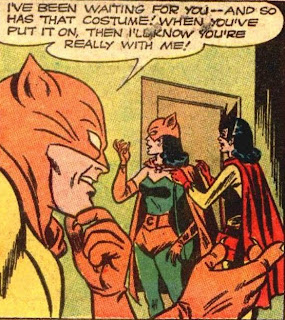 Well, that's an interesting test of the sincerity of one's affections. So, if she really wasn't that into him, may I presume her body would have rejected the costume and it would have burst into flames? That actually would have been kind of cool, but I think old Cats is just reaching for validation here. 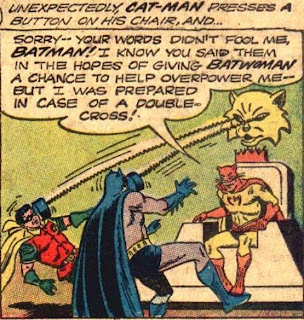 I think we're all surprised that trap worked.

But it did, because there were more pages to fill, and it gave Bruce an excuse to call Ace: 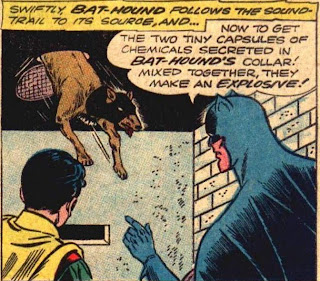 I'm the first to say I got a little weary of Ace's role consisting of getting pat on the head by Robin before Bruce and Dick left on a mission and getting told "There's no need for you on this mission, boy!" But putting two chemicals that explode when mixed in the dog's collar is a little too reckless for my taste. Here's how a dog's mind works:

I sure am bored.

Hey! Is that something dead?

I think I'll roll around in it as hard as I can, and get that dead animal smell all over!

Wow, that feels great! I think I'll grind even harder!

You see the problem. Maybe Bruce just could keep one of the chemicals in the heel of his shoe and the other in one of those bat-ears on his cowl. I mean, the heel of his shoe is where he kept the radio that he used to signal Ace in the first place. It seems like we could have made things more efficient and avoided unnecessary risk to the dog. I'm just saying.

See you Monday!
Posted by Adam Barnett at 12:42 AM

"..Batwoman has joined forces with the Cat-Man and become the Cat-Woman!"

Ignoring the fact that Batman's already been dealing with a Catwoman for over a decade at this point, why would he assume she's not "Cat-Girl" or "Cat-Lady" or "She-Cat" or even "Kitten"?
It's not as if he's noted for his politically-correct viewpoint on females, as noted in several recent entries...

And the heroic Cat-Man of the 1940s (with a VERY similar costume) had a nubile teen sidekick named "Kitten"!
http://www.cafepress.com/atocom.407061361

Presumably though, Ace is backup to Batman's colelction of explosive materials. Along with Robin as backup as well. So when Batman has run off to an emergency and hasn't had time to stock up on exposive stuff, and Robin's run out....for somer eason or rather...he always has the services of Ace to call on.

Yes, not sure why Catman is willing to settle for Batman's cast offs, but I do wish Batwoman would get a grip. The fact that she's taken to slapping Batman and he's still not wondering, "Is it me?" would imply some lack of EQ there.

I'm confused why the front cover shows Catwoman with Invisible Girl wearing Batwoman's costume behind her. Except for one boot.

"I'm confused why the front cover shows Catwoman with Invisible Girl wearing Batwoman's costume behind her. Except for one boot."

Actually the empty costume is just hanging there, probably on a hook.
And both boots are there!

Hmm, that reporter behind Batman when he gets slapped by Batwoman is Clark Kent?

I, for one, am just still trying to figure out how Batman speaks with a hyphen: "Cat-woman," not "Catwoman."

Ya'd think that the Cat-Man would take a revelation of secret identity as more significant that a change of costume. And, being a villain, wouldn't he have had a peep-hole in the changing room?

At some point the Bath-Ound stopped appearing in stories. Perhaps he did roll in something.

Yes, I meant that Invisible Girl was only wearing one boot (unless her ankle has suddenly become rather floppy). Oh well, I guess it's just my mind... :-)