There is No Force as Compelling as Female Vanity Tuesday!

Sorry about the late post. Monday whooped on me, and I just wanted to go home and forget it ever happened. I'm getting old, yes I am! Fortunately, I had some help from loyal readers to give you junkies your daily fix of comic book goodness!

First, from Nicholas Karr: Back in the 1970's, there was a dreadful cartoon called Super Friends, which was an embarrassingly lame title even to my grade school aged self, and the cartoon made the 1966 Adam West Batman series look like The Dark Knight. The two biggest flaws of the cartoon were that you couldn't use the word "kill" so everyone talked about "destroying" each other a lot, and you could never, ever show anyone get hit. So, as you might imagine, Super Friends was a big tease to those of us who read comics solely for the fighting (ie, everyone who reads comics).

The fact that DC had to publish a special Super Friends comic is conclusive evidence that DC didn't have any titles that stupid in their roster so they had to put out a special one for parents who didn't trust the Comics Code Authority. It was so stupid, I couldn't bring myself to read it, and I would read almost anything that had Batman in it.

Anyway, here's a classic "predicament" in which the Super Friends would find themselves: 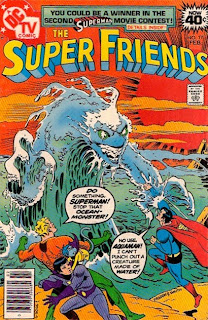 I forgot to mention that when the Super Friends first aired, they didn't have any members that weren't instantaneously recognizable by one's grandmother, so we had Robin (who is cool in his own right) and Aquaman (who is cool in solo stories, but never when he's part of a team). It was in Super Friends that it was really showcased as to how limiting Aquaman is unless you happen to have a situation in the ocean. On this cover, he's in a panic as to deal with an ocean monster.

Yes, Aquaman is losing his mind over an ocean monster.

You know, if the Super Friends version of Aquaman wets his already-wet pants over an ocean monster, I think he's outlived his usefulness. That's like me freaking out at finding leftover pizza in the fridge. Oh, no! Whatever shall we do?

But remember, no one can get hit, so we resort to more passive measures: 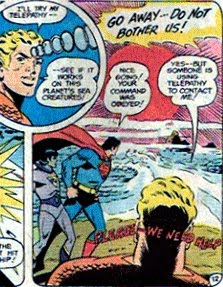 It should be worth noting that they were on an alien planet, so this was an alien ocean monster. I don't know why any ocean monster would be taking directions from Aquaman, much less an ocean monster outside the Super Friends' normal jurisdiction of Lamesuckfest.

Anyway, thanks to Nicholas for the help!

And here's some fun from our friend sPat!

And speaking of vanity, I've always thought Hawkgirl's headgear made her remarkably unattractive. Is it just me?

Or is it my rod? Because it's time for Fun with Out of Context Dialogue! (tm!) 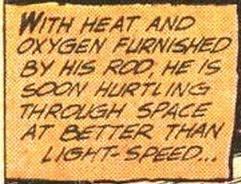 That's right... my rod gives heat, oxygen and everything else one needs to survive. It's that awesome! 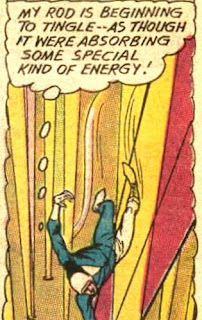 I have a joke here about "tingling rods" and energy dissipation, but it was terribly filthy and I really don't want to read your angry comments.

Thanks for the help, Nicholas and sPat! And if you find something funny, don't forget to send it to me! I need all the help I can get!

See you tomorrow!
Posted by Adam Barnett at 9:59 AM

I think that headgear Hawkgirl is sporting wouldn't make her as unattractive if it wasn't for the huge, ugly eyes it gives her. It wouldn't be pretty anyway, but still... Big ugly fish eyes!

Seriously, you can NEVER have too many vibrating rod jokes.

I agree with Flossin. in the Justice League America/Unlimited series, Hawkgirl was actually moderately attractive even with the helmet on. why? no huge fish eyes. :P

I'm pretty sure that panel is actually from the early 60s. That's vintage Joe Kubert-Murphy Anderson art and they drew Hawkman during the early part of that decade. Hawkman's book was cancelled in 1968

Wait, Robin? That's totally Zan, one half of the Wonder Twins, and Gleek the space monkey.