A Mountain of Mighty Hercules Monday!

As we get into the 100s of Batman, we see Bruce and Dick hauled from one dimension and alien planet to another. This was an era that will some day be universally regarded as The Batman Comics Adam Doesn't Like to Read. 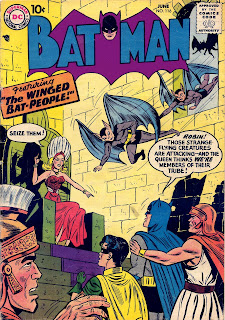 Robin, those strange winged creatures are attacking! And they look like bats! And I'm Batman! And they happen to be wearing the same color clothing as I! Dang the unfortunate coincidence that brought about this misunderstanding!

Some of these ads get kind of harsh: 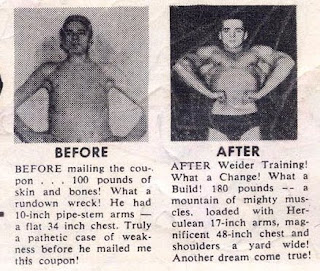 He was a pathetic case of weakness... until he mailed me the coupon and I took an X-Acto Knife and glued the photo of his face onto a picture of a bodybuilder. Photoshop hadn't been invented yet, so I couldn't do anything about the obvious differences in shading. Just buy my products before someone gets hurt! 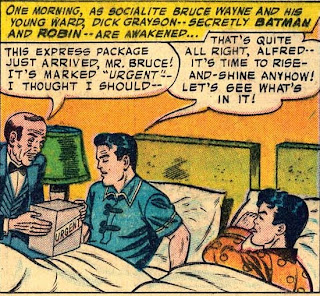 If I were Dick, I'd be hoping that the package contained an air mattress so he could sleep on the floor instead of in that bed. I don't care if they are twin beds or not, when they're pushed that close together, I think it's time to call Child Protective Services.

And now, a Moment of Comic Book Greatness! (tm!): 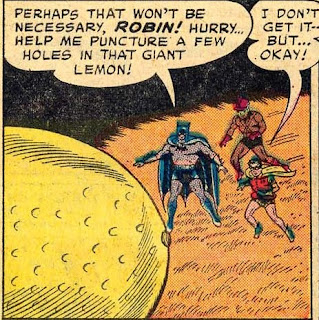 Which just goes to show that even a bad comic can have its moment of greatness.

See you tomorrow!
Posted by Adam Barnett at 12:02 AM

I'm actually more worried about that guy *after* he bulked up. That does not look healthy at all.

And there's nothing in that box Alfred's got. It's a running gag he and Bruce use to wake Dick up in the morning. There's a hole in the bottom and Alfred will lift it to reveal Bruce's chubby.

That last panel is now my new favorite "Maybe Frederic Wertham was right" image. A rich man sleeping in the same bed with a young boy is just too "Michael Jackson" for me, but a couple of guys in skin tight lycra puncturing a giant lemon - - I'm all for it. :)

A giant lemon? They're going to fight Hal again, aren't they?

Not to keep harping on it, but this is among the worst cover dialogue you've posted yet. "Robin! Let me explain to you exactly what's happening, as it's happening, you idiot!"

Aaaaand... I can understand how a giant typewriter works, even if I don't understand why someone would build one. But where does a giant lemon come from?