Giving Myself a Refresher Course in Super-Naturalism Friday!

I enjoy team-up books where there are rotating memberships because you never know what you'll get in the next issue. F'rinstance: 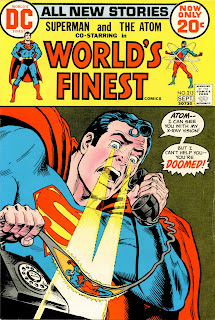 You're DOOMED! Or mildly inconvenienced until I find a pair of wire cutters. One of the two.

It's become a running joke that Batman, if given enough time and resources, could kick the ass of anyone in the DC Universe. This was a running joke because it certainly seemed to be the case.

But it's been that way for a long time: 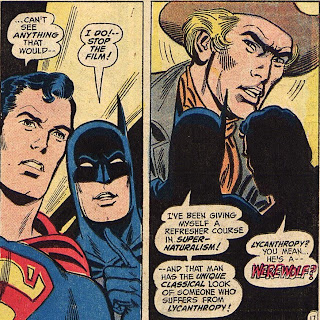 By an amazing coincidence, I just happened to be studying up on people who become werewolves. How fortuitous! Next week, I'll be taking a course in community college on how to deactivate a hydrogen bomb!

And, as certain as any movie starring "The Rock" is going to stink on ice, there will be a hydrogen bomb situation the minute Bruce gets his Certificate of Attendance. That's how comics work. But just once, I'd like to see a situation where Bruce says, "Dang it! I haven't read that chapter yet! We're screwed!"

This is my new favorite Item Inappropriately Offered for Sale in a Comic Book Marketed at Young Children!(tm!): 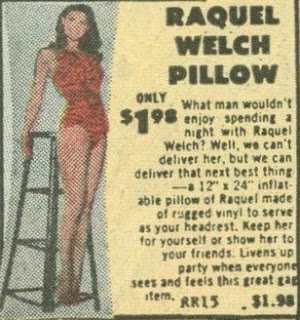 Say, honey, why is Timmy spending all that time in his bedroom? He hasn't come out since the mailman left him that package last week....

See you Monday!
Posted by Adam Barnett at 1:56 PM

A unibrow is a classic sign of lycanthropy? This explains so much about Frida Kahlo.

Raquel Welch pillow? I'll be darned, we beat Japan to it by decades.

With that psycho expression on Superman's face, I don't think he's there to help the atom at all.

in fact he almost seems intent on killing him. :p

"You're Doomed!" um, until I get go of the phone cord.

Oh, and how does The Atom get around thes days with Wireless?